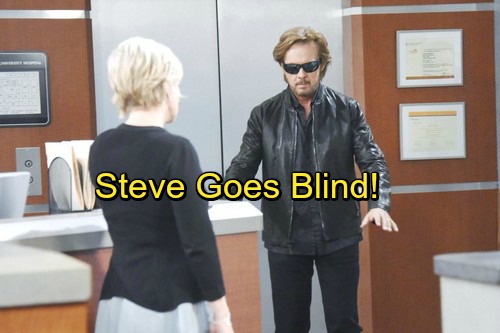 Days of Our Lives (DOOL) spoilers tease that Steve (Stephen Nichols) will face some tough moments next week. DOOL fans know that the poison John (Drake Hogestyn) delivered caused major problems. Steve’s cornea was severely damaged and there’s nothing his doctors can do about it. Kayla (Mary Beth Evans) is doing everything she can to stop his vision decline, but she’s running out of time.

Steve even went to a specialist, but he still didn’t get the news he was looking for. At this point, Steve is just trying to prepare for the inevitable. Unfortunately, it’ll still be difficult to deal with the rapid deterioration. On March 29, Days of Our Lives spoilers say a shocking setback is on the way.

It sounds like Steve’s vision may blur to the point where he can’t make out faces and objects. This is a step closer to total blindness, so it’s sure to be a real blow for Steve. Days viewers can expect Steve and Kayla to get emotional throughout this ordeal. They’ll struggle to accept that this is really happening.

If this keeps up, things should be pitch black for Steve soon. Days of Our Lives watchers know that Steve’s strong and can always roll with the punches. However, this could be his hardest battle yet. The thought of being a burden to Kayla is absolutely devastating. Steve doesn’t want to lose his independence or his ability to see his beautiful family.

Nevertheless, that’s exactly what’ll happen if Steve’s cornea damage can’t be reversed. Perhaps Days will let Steve go blind and let that play out for a while. Since they’ve set this story up, they might as well take full advantage of the drama.

Of course, it’s doubtful this will truly be permanent. Stephen Nichols seems to be sticking around, so they probably won’t make him pretend to be blind forever. It would limit what Steve’s character is able to do. Steve tends to be a hero in many hot plots, so we need him back to his old self eventually.

Plus, John deserves a shot at redemption. If he hopes to earn the forgiveness of DOOL fans, he’ll need to make this right. Will John seek out experimental procedures to save Steve’s sight? Can he save the day and do something significant for his friend?