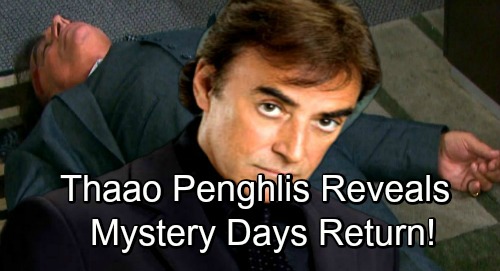 Days of Our Lives (DOOL) spoilers tease that Thaao Penghlis (ex-Andre) is headed back to Salem. Penghlis also portrayed Tony on the NBC soap, but Andre’s the one who’s most likely to return. Ever since Andre’s latest demise, Days has found inventive ways to use him here and there.

Now it looks like they’ve found another one. Penghlis has an exciting episode in the works, but DOOL fans will have to be patient. The show films several months in advance, so it’ll be a while before Penghlis pops up on screen again. Days of Our Lives spoilers say Penghlis’ next airdate is in March, 2019. We should see some terrific material when he finally makes his comeback.

In an interview with Soap Opera News, Penghlis dished on his upcoming appearance. He offered some fun hints for DOOL viewers. It turns out Penghlis worked with Deidre Hall (Marlena and Hattie) this time around. He suggested there’d be some other familiar faces in their scenes, but he had to be secretive about which ones.

“It’s a great show,” Penghlis said. “One of the best I’ve done with Dee. We have most of the dialogue. It’s a very interesting approach. Something I’ve not done before. I can’t tell you who is in it or who is playing what. It was well done.”

It sounds like Days of Our Lives has something special in mind. Sometimes it’s nice to have a little break from the usual action. This could be a fantasy episode involving someone’s dream or perhaps just an apparition. Regardless, Penghlis and Hall should knock it out of the park! They’re fantastic performers who really know how to get the job done.

Penghlis also reflected on his earlier years at Days and the DiMera legacy he created with Joseph Mascolo (Stefano). The DiMeras definitely deserve to be revered and remembered! Certain family members may come and go, but they’ve always been a steady force in Salem.

“Joe Mascolo and I created those two characters so many years ago and gave the DiMera a family foundation, that to me, had the greatest storylines, greatest drama and humor,” Penghlis said. “Joe and I established the passion the DiMera family has and the love of family.”

Would you like to see Penghlis back full-time as Andre or even Tony? What about the rest of the DiMera clan? Do you want an EJ recast to shake things up? Are there any other DiMeras that should be in Salem again? We’ll give you updates as other Days details emerge. Stay tuned to DOOL and don’t forget to check CDL often for the latest Days of Our Lives spoilers, updates and news.