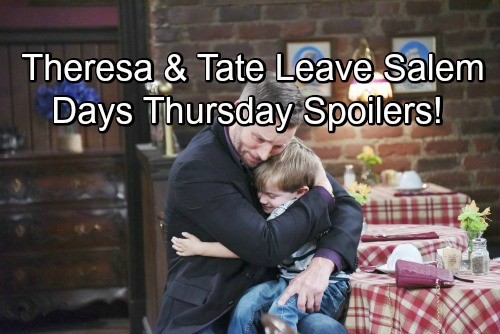 Days of Our Lives (DOOL) spoilers for Thursday, July 19, tease that Theresa (Jen Lilley) will get some upsetting news. Roman (Josh Taylor) just received a call about Kimberly (Patsy Pease), so he’ll have to pass along the troubling updates. He’ll reveal that Theresa’s mom is battling cancer again. Kimberly could certainly use some support right about now.

As a result, Days of Our Lives spoilers say Theresa will decide to move to California with Tate (Colin and Kyle Schroeder). Of course, this will bring another setback for Brady (Eric Martsolf). He’ll be called over to bid Tate farewell, so the tears will really start flowing.

Brady will think this goodbye feels final, but Theresa and Tate will undoubtedly be back one day. For now, Theresa will thank JJ (Casey Moss) for everything and take Tate to the airport for their flight. DOOL fans won’t want to miss Theresa and Tate’s last airdate!

Other Days of Our Lives spoilers say Ben (Robert Scott Wilson) will remain on the hot seat. Hope (Kristian Alfonso) and Rafe (Galen Gering) believe he set the cabin fire, so they’ll do their best to wear him down. They’ll think they can pry a confession out of Ben if they keep at it.

Over with Ciara (Victoria Konefal), she’ll continue to fret over Ben’s fate. Ciara just won’t think it’s fair that Ben’s suffering for something he didn’t do. She’ll want to get him off the hook, but Claire (Olivia Rose Keegan) will be more concerned about their love lives.

Days spoilers say Claire will fish for info on Ciara and Ben’s relationship. She’ll think this could set up her chance with Tripp (Lucas Adams), but things are sure to be complicated. Ciara may assure Claire that she’s not moving on with Ben, but we all know she’s considering it deep down. There’s a strong connection between them, but Tripp may not give up on Ciara just yet.

It sounds like Days has another great episode in store. We’ll keep you posted as other DOOL details emerge. Stick with the NBC soap and don’t forget to check CDL often for the latest Days of Our Lives spoilers, updates and news.