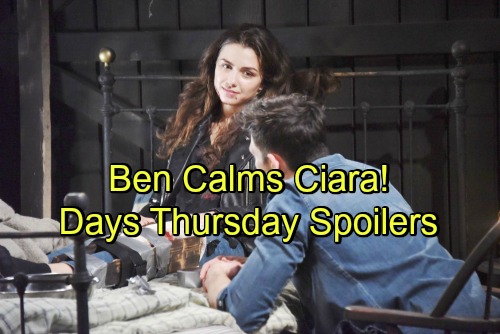 Days of Our Lives (DOOL) spoilers for Thursday, June 14, tease that Ciara (Victoria Konefal) will have a serious meltdown. She just woke up at the cabin with Ben (Robert Scott Wilson), so she’s understandably terrified. It doesn’t help that Ben’s reliving all his horrible memories. He’s looking awfully unhinged at the moment, but he’s really just tormented by everything he’s done.

Ciara should be a mess as she deals with this dangerous situation. Ben claims he’s changed and his doctors are backing him up, but this is his first real test. He has to prove he’s stable and can avoid violence. Days of Our Lives spoilers say Ciara will lash out at Ben for taking her somewhere secluded. She may change strategies eventually and beg Ben to spare her life.

Of course, Ben will offer reassurance. He’ll promise Ciara that he’s rehabilitated and isn’t going to hurt her. Days spoilers state that Ciara will have her doubts, but what can she do? It turns out she’s got a broken leg, so she’s stuck with Ben whether she likes it or not. DOOL fans can expect plenty of tension as Ciara gets to know him and tries to judge his sanity.

Other Days of Our Lives spoilers say Tripp (Lucas Adams) and Hope (Kristian Alfonso) will join forces. They’ll work together on a Ciara search, but they won’t know where to start. Ciara’s phone is dead and she hasn’t been in touch with either of them. It’s going to take some hard work, but Hope and Tripp will be determined to make progress. They’ll hate the thought of Ciara being injured or trapped in peril.

Meanwhile, Theresa (Jen Lilley) will remind Brady (Eric Martsolf) of her terms and push him to accept his fate. She believes they’re meant to be, so she’ll hope her latest plot will nudge Brady back in her direction. Days spoilers say Theresa will make another sexy offer on Thursday. She’ll do her best to inch Brady toward a night of passion, but he’ll certainly put up a fight.

Over with Eve (Kassie DePaiva), she’ll work to ruin Theresa’s scheme. DOOL spoilers reveal that Eve will turn to Stefan (Tyler Christopher) for financial assistance. She’ll walk away with a deal, so Theresa’s got a curveball coming. We’ll give you updates as other news emerges. Stay tuned to the NBC soap and don’t forget to check CDL often for the latest Days of Our Lives spoilers, updates and news.