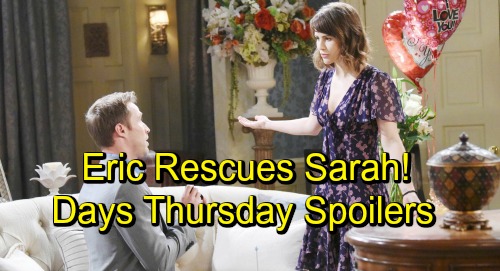 Days of Our Lives (DOOL) spoilers for Thursday, November 15, tease that Rex (Kyle Lowder) and Lucas (Bryan Dattilo) will share their struggles. They’ll do some commiserating and try to heal their broken hearts. Rex lost his fiancée and Lucas lost the baby, so they’ll be able to relate to each other’s loss.

Of course, Rex is to blame for driving Sarah (Linsey Godfrey) away. Poor Lucas was the victim of Bonnie’s (Judi Evans) cruel scheme, so it’s not his fault he’s suffering. After talking things over with Rex, Lucas will have a chat with Chloe (Nadia Bjorlin). They’ll assure each other of their love, but that won’t be enough to keep Lucas around. He may suggest he needs to get away and clear his head for a while.

It wouldn’t hurt to pay Allie a visit. Lucas lost one fake daughter, but he’s got a real one who would surely love to see him. Whatever the case, Lucas will leave town on Thursday’s DOOL episode. Word has it he may have another airdate or two down the road, but Lucas’ time at Days is definitely wrapping up.

Back with Rex, Days spoilers say he’ll have a tense run-in with Sarah. Thankfully, Eric (Greg Vaughan) will once again step up to settle this. He’ll prevent a major scene and distract Sarah a bit, so she should feel better about the situation. Both Eric and Sarah are hurting right now, but that’ll just serve as a great way for them to connect in the coming weeks.

Other Days of Our Lives spoilers say Paul (Christopher Sean) will lash out at Will (Chandler Massey). He’ll be upset over Will’s decision to lie about their romance. Paul wanted a solid relationship that was built on trust, but now he’s facing the facts. Will loves Sonny (Freddie Smith) and has been pretending to want Paul out of pity.

That’ll spark a serious confrontation, but Paul will do his best to move on. He’ll need some time to lick his wounds, but he can do that after he leaves for treatment in San Francisco next week. Will you be sad to see Paul go? We’ll give you updates as other Days of Our Lives news comes in. Stay tuned to DOOL and don’t forget to check CDL often for the latest Days of Our Lives spoilers, updates and news.