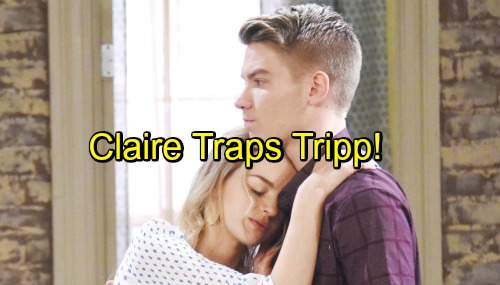 Days of Our Lives (DOOL) spoilers tease that Claire (Olivia Rose Keegan) won’t give up on her goal. She always wants what she can’t have and right now that’s Tripp (Lucas Adams). He’s only got eyes for Ciara (Victoria Konefal), but Claire will believe she can change that soon enough.

The scheming blonde’s already made progress thanks to Ben (Robert Scott Wilson) and Ciara’s growing bond. Claire backed Ciara up when she brought Ben in as a new roomie. She also tried to nudge Ben in Ciara’s direction, so her plot’s definitely in motion. Claire just has to see it through to the end.

Days of Our Lives spoilers say Claire will take the next step this week, September 10-14. She can’t focus solely on the Ben and Ciara angle. Claire has to steal Tripp’s heart, too. She’ll try to make it happen with a little manipulation, but Tripp will be tough to break. It’s clear that he’s pretty hung up on Ciara.

Plus, jealousy can be a powerful motivator. Having Ben around makes Tripp protective and desperate to fight for the girl he loves. Tripp has barely noticed Claire lately, so she’ll step up her game. Naturally, Days spoilers say Tripp will fall for Claire’s trap. They’ll end up hanging out for a while, which could prove to be a terrible mistake – at least on Tripp’s side of things.

DOOL fans will recall what brought about Tripp’s current nightmare. Claire and Tripp nearly had sex, so they were naked under a blanket when Ciara caught them. They tried to explain, but it was futile. That led to Ciara’s motorcycle crash and bonding sessions with her rescuer, Ben.

Tripp’s been clawing his way back into Ciara’s heart, but his plans could fall apart soon. Days of Our Lives spoilers say Ciara will catch Claire and Tripp again. Although this discovery probably won’t be as scandalous, it should still hurt. Ciara may feel like they’re sneaking around behind her back. She’ll at least know Claire’s up to her old tricks.

Claire might make sure they’re sharing a close moment when Ciara arrives. They’ll most likely be fully clothed, but she could steal a kiss or make it seem like she was going to. Regardless, Tripp might once again suggest it’s not what it looks like.

Unfortunately, Ciara may not listen. This could be exactly what she needs to push her into Ben’s arms. Will Claire’s hard work pay off? We’ll give you updates as other Days news comes in. Stay tuned to DOOL and don’t forget to check CDL often for the latest Days of Our Lives spoilers, updates and news.