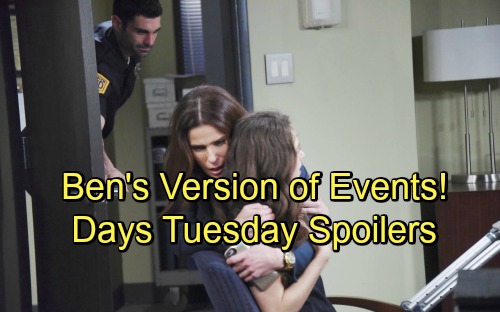 Days of Our Lives (DOOL) spoilers for Tuesday, July 10, tease that Ciara (Victoria Konefal) will head to the hospital for treatment. She suffered some smoke inhalation and her leg needs the proper care as well. Hope (Kristian Alfonso) will be relieved to know her daughter’s safe and back in Salem. However, she’ll still have questions about everything that happened with Ben (Robert Scott Wilson).

Ciara will insist that Ben saved her life and tended to her at the cabin. He patched Ciara up and even cooked her a few meals. Ciara will be grateful for Ben’s assistance, but Hope will think he sparked a DOOL disaster. She’ll be horrified when she hears about Ben’s meltdown before the blaze. Hope will be convinced that Ben lost it and tried to kill Ciara by setting the cabin on fire.

Of course, Ciara won’t be so sure about that. She’ll feel like she needs to hear Ben’s side of the story, so she’ll sneak over to the police station soon enough. Meanwhile, Days spoilers say Tripp (Lucas Adams) will get updates on Ciara’s ordeal. He’ll rush across town to see her and deliver a heartfelt apology. Ciara may have already left the hospital by then, but Tripp will catch up with her eventually. 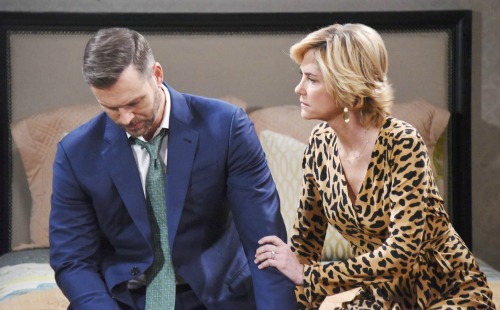 Other Days spoilers say Theresa (Jen Lilley) will deal with plenty of guilt. She wants custody of Tate (Colin and Kyle Schroeder), but she hates how much she’s hurting Brady (Eric Martsolf). Theresa never wanted to fight over their son, but she felt like she was backed into a corner. She had to secure a significant place in Tate’s life.

After Theresa opens up to JJ (Casey Moss), Days of Our Lives spoilers state that he’ll offer some advice. JJ will suggest that maybe Theresa and Brady can reach an agreement. He’ll encourage Theresa to make an effort, but any plans for peace won’t pan out. Eve (Kassie DePaiva) isn’t the kind of gal who backs down and she won’t let Brady back down either!