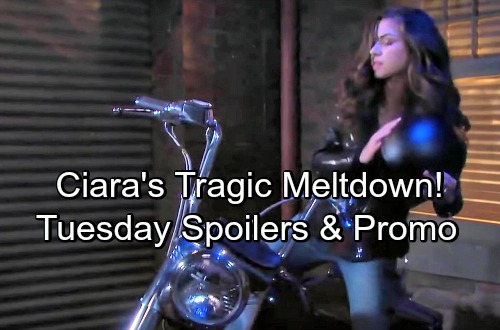 Days of Our Lives (DOOL) spoilers for Tuesday, June 5, tease that JJ (Casey Moss) will take a moment to catch up with Theresa (Jen Lilley). He’ll be happy to hear that she’s safe after her horrific ordeal in Mexico. Theresa may crumble a bit during this chat. She could use some support right now, so JJ will be there to offer it.

Brady (Eric Martsolf) really let Theresa have it during their last confrontation. He made a few valid points, but most of his criticism was totally unfair. No one seems to care that Theresa’s been suffering as a drug lord’s sex slave for a year and a half. Her sacrifice should count for something, but Brady is choosing to shut her out.

After Theresa opens up about her problems, JJ will realize she has nowhere to go. He’ll decide he can’t turn his back on someone in need. Days of Our Lives spoilers say JJ will urge Theresa to come stay at his place. He’ll convince her to move in with him while she figures out what’s next.

At the loft, Ciara’s (Victoria Konefal) shock will turn to anger. She just caught Tripp (Lucas Adams) and Claire (Olivia Rose Keegan) naked on the sofa, so she’ll have a major meltdown. Ciara will suggest that they both wasted no time in moving on. She’ll be furious that Tripp could get over her so quickly. Of course, Ciara will also blame Claire for coming home and immediately stealing her man.

Tripp will explain that he changed his mind before doing the deed, but Ciara won’t want to hear it. Days of Our Lives spoilers state that Ciara will eventually storm out. She’ll ride off on her motorcycle, but she’ll be far too upset to stay safe on the road. Ciara will suddenly crash her bike and lose consciousness thanks to her injuries.

Other Days spoilers say Brady will rip into Victor (John Aniston). DOOL fans know Victor encouraged Theresa to keep quiet about Chloe (Nadia Bjorlin), so he’ll certainly get an earful for that. Over with Justin (Wally Kurth), he’ll determine that he’s got a real fight on his hands. Leo’s (Greg Rikaart) lawyer, Ted (Gilles Marini), will present plenty of bogus proof against Sonny (Freddie Smith).

This sexual harassment case will bring some hot drama, so don’t miss all the tricks Leo and Ted have in store. We’ll give you updates as other Days news comes in. Stick with DOOL and don’t forget to check CDL often for the latest Days of Our Lives spoilers, updates and news.