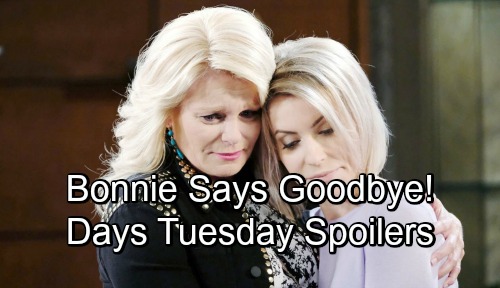 Days of Our Lives (DOOL) spoilers for Tuesday, November 6, tease that Rex (Kyle Lowder) will catch up with Sarah (Linsey Godfrey). She was devastated when she found out Rex cheated on her with Mimi (Farah Fath), so she ended up walking out on their engagement party. Sarah was clearly dealing with plenty of anger and sorrow, but it’ll all build into full-blown rage soon enough.

DOOL viewers can expect a furious meltdown on Tuesday. Sarah will rip into Rex for betraying her, so he’ll take whatever she dishes out. Rex will realize he deserves Sarah’s wrath, but he’ll still want to explain again when she’s done. He’ll beg Sarah to understand that it was a meaningless one-night stand. It was back when Rex and Sarah were having problems, so he slipped up in a moment of weakness.

Of course, Sarah may not buy that it meant nothing. Rex and Mimi go way back, so Sarah might think this is always going to be a problem. Since there’s a baby involved, Mimi and Rex will be tied to each other forever. Days of Our Lives spoilers say Sarah just won’t be on board for all this drama. She’ll deliver a brutal slap to Rex’s face and insist that the wedding’s off.

Elsewhere, Bonnie (Judi Evans) will wrap up her return stint. She’ll bid Mimi and Emily farewell before her latest Days run concludes. Will Bonnie sneak out of town again or get thrown back behind bars? Regardless, Bonnie won’t be causing any more trouble around Salem – for now at least!

Other Days spoilers say Belle (Martha Madison) will have a happy reunion with Marlena (Deidre Hall). She just found out the big swap secret, so she’ll be glad to see her recovering mother. Belle will share a tender chat with Marlena before making amends with John (Drake Hogestyn). They’ll both admit to some mistakes and agree to move past their recent issues.

Next, Sami (Alison Sweeney) will battle concerns about EJ (last played by James Scott). She’ll tell Marlena about some things she’s struggling with and hope for some advice. Sami may reiterate that EJ may have amnesia or decreased mental capacity. She doesn’t know what state EJ was in before he was nearly killed in the fire.

Marlena may argue that Sami and EJ fought too hard for this to not pan out. She might urge Sami to have hope and just focus on helping EJ get better. When Sami returns to EJ’s room, she’s in for a shock. EJ will be gone thanks to Susan’s (Stacy Haiduk) kidnapping plot, so Sami will have to find them ASAP.

Fortunately, Susan and EJ won’t get very far. Later this week, Days of Our Lives fans will see a Sami and Susan showdown in the morgue. We’ll give you updates as other news comes in. Stay tuned to DOOL and don’t forget to check CDL often for the latest Days of Our Lives spoilers, updates and news.