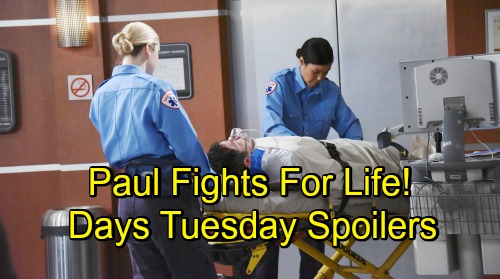 Days of Our Lives (DOOL) spoilers for Tuesday, September 4, tease that Will (Chandler Massey) will face an unpleasant task. He just decided he wants to be with Sonny (Freddie Smith), so he knows he’ll have to break Paul’s (Christopher Sean) heart. Will will grab his phone to set up a meeting with his current beau, but Brady (Eric Martsolf) will be the one who picks up.

DOOL fans can expect Will to get quite a shock. He’ll receive news that turns his world upside down and changes his plans for the future. Days of Our Lives spoilers say Brady will fill Will in on Paul’s accident. During a struggle with Kristen (Stacy Haiduk), Paul tumbled out the window with the gun-toting baddie. Brady will explain that Paul was rushed to the hospital with serious injuries.

In that moment, Will’s only going to care about Paul’s well-being. Any romantic shifts will be put on the backburner. Will has to make sure Paul’s OK before he does anything drastic. It turns out Will’s going to back off the breakup idea for now, so Sonny will just have to be patient and hope for the best.

As for Kristen, she’ll be in far better shape. Days viewers will recall that Kristen fell out of a castle window in Italy. Compared to that, this fall is nothing! Kristen won’t even look banged up, so it doesn’t seem like she’ll need medical attention. However, Kristen will still need a favor. That’s why she’ll show up at the DiMera mansion and beg Stefan (Tyler Christopher) for help.

Kristen may be searching for a place to hide out for a while. There are plenty of secret tunnels and rooms, so Stefan could pitch in on that. This could be the beginning of a beautiful partnership if Stefan and Kristen cooperate. They both have ruthless mindsets, so maybe they’ll get along splendidly.

Other Days of Our Lives spoilers say Roman (Josh Taylor) will drop a bomb on Kayla (Mary Beth Evans). He’ll track her down and reveal that Steve (Stephen Nichols) was arrested for espionage. The info recorded with his bionic eye caused the trouble. Kayla will process this crushing blow and spill her secret to Roman. She’ll hate that her deal with Stefan went so horribly wrong.

It sounds like a fantastic episode’s on the way. We’ll give you updates as other Days details emerge. Stay tuned to DOOL and don’t forget to check CDL often for the latest Days of Our Lives spoilers, updates and news.