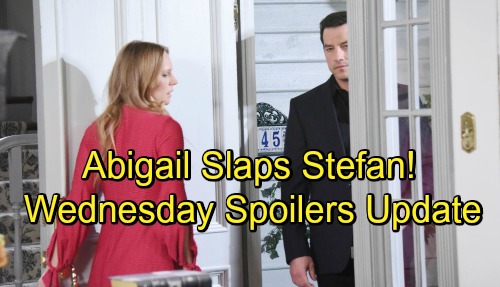 Days of Our Lives (DOOL) spoilers for Wednesday, August 8, tease that Stefan (Tyler Christopher) will want to get a few things straight. He just showed up at the Horton house, so Abigail (Marci Miller) will reluctantly let him in. Her “baby daddy” is the last person she wants to see right now, but Stefan will insist on discussing the future.

DOOL fans can expect some firm demands from Stefan. He’ll make it clear that he’s going to be in this child’s life whether Chad (Billy Flynn) and Abigail like it or not. Stefan won’t want Chad taking over and fulfilling the father role. Since Stefan believes this is his baby, he’ll do whatever it takes to carve out a proper spot in his son or daughter’s life.

Days viewers know Gabi (Camila Banus) did some paternity test tampering, which means this kid is actually Chad’s. However, Abigail and the DiMera brothers will remain in the dark for now. As Stefan gets in Abigail’s face and shares his parental conditions, she’ll suddenly slap him. It won’t accomplish anything, but at least it’ll bring Abigail some satisfaction! 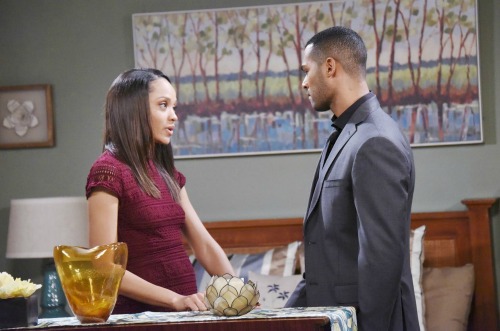 Other Days of Our Lives spoilers say Eli (Lamon Archey) will spend some time with Lani (Sal Stowers). They’re still struggling to move past the loss of their child, so it’s important to lean on each other for support. As they continue to grieve, Eli will feel closer to Lani than ever before. He’ll decide to plant a kiss on her, so this could mark a crucial turning point in their relationship.

At the loft, Tripp (Lucas Adams) will do his best to get rid of Ben (Robert Scott Wilson). He’ll want to protect Ciara and prevent a “Cin” spark from forming. Of course, that spark has already arrived. Ciara is clearly falling for Ben, so she’ll want to hear him out.

Thanks to Marlena’s (Deidre Hall) hypnosis, Ben now recalls the entire night of the fire. He’ll let Ciara know that he’s sure of innocence. Days of Our Lives spoilers state that Ciara will believe Ben, but convincing Hope (Kristian Alfonso) should be a lot tougher.

In fact, Hope will push to have Ben recommitted on Wednesday’s new Days episode, August 8. She’ll insist that it’ll be safer for everyone, but Marlena will deny her request. Hope won’t give up on sending Ben as far away from Ciara as possible, so she’ll have to explore other options later this week.

It sounds like the excitement is revving up in Salem. We’ll give you updates as other Days news comes in. Stay tuned to DOOL and don’t forget to check CDL often for the latest Days of Our Lives spoilers, updates and news.