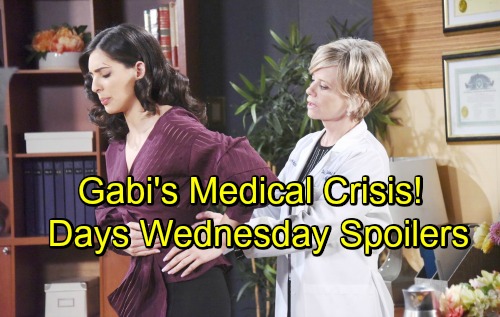 Days of Our Lives (DOOL) spoilers for Wednesday, July 11, tease that Ciara (Victoria Konefal) will sit down across from Ben (Robert Scott Wilson) and seek some answers. She just slipped out of the hospital and hobbled over to the police station. Everyone seems to think Ben’s still a fire-setting murderer, but Ciara isn’t willing to take their word for it. She intends on giving him a chance to talk.

Thanks to Rafe’s (Galen Gering) interrogation, Ben’s feeling pretty low. He’ll be pleased to have a friendly face in the room this time. However, Ciara will feel like she has to ask the tough questions here. She needs to know the truth about the cabin fire, so she’ll push Ben to give her the real story. Ciara will wonder if Ben set the blaze and tried to kill her.

Days of Our Lives spoilers say Ben will insist that he’s innocent. He promised Ciara that he’d never hurt her and he kept that promise. Ben will beg Ciara to believe him and she ultimately will. They’ll share a powerful moment as they bond over their trust. The evidence should point away from Ben eventually, so Ciara should be glad she had faith in him.

Meanwhile, Kate (Lauren Koslow) and Ted (Gilles Marini) will get busy in the bedroom. They’ve been building to this for a while now, so expect some truly steamy moments. After a passionate sex session, Days spoilers say Ted and Kate will be closer than ever. These two could be on the verge of a real relationship, but it’s bound to end in disaster. Kate’s never very lucky in love!

Elsewhere, Will (Chandler Massey) and Sonny (Freddie Smith) will be downright frantic. DOOL fans know Leo’s (Greg Rikaart) vehicle has gone missing. His body was in the trunk and the cover-up duo’s fingerprints were all over the place.

That’s why Sonny and Will need to track that car down immediately. Days of Our Lives spoilers state that they’ll put their heads together on Wednesday. Who moved the vehicle and where did he or she put it? Sonny and Will are going to have a hard time cracking the case.

Finally, Gabi (Camila Banus) will suddenly be in agony. She’ll double over in pain, so Maggie (Suzanne Rogers) will rush her to the hospital. Days spoilers say terrible news is headed Gabi’s way later this week. We’ll give you updates as other DOOL details emerge. Stay tuned to the NBC soap and don’t forget to check CDL often for the latest Days of Our Lives spoilers, updates and news.