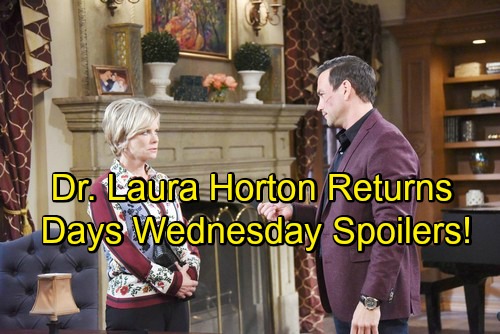 Days of Our Lives (DOOL) spoilers for Wednesday, May 30, tease that Dr. Laura Horton (Jaime Lyn Bauer) will be back for an important task. Abigail (Marci Miller) managed to avoid prison, but she still has to undergo intensive court-ordered therapy. Of course, Abby has no problem with that. She wants to get rid of her alters for good, so Laura will do her best to make sure Abigail achieves her goal.

DOOL fans can expect Laura and Abigail to get to work right away. They’ll hope to make some progress in integrating Abigail’s personalities. By making Abigail’s alters part of her true self, there’ll be no chance of them returning separately. Days of Our Lives spoilers say an interesting session’s on the way, so stay tuned for some great scenes.

In prison, Gabi (Camila Banus) will find herself in quite a bind. Diane (Cassandra Creech) came after her in the infirmary, which resulted in dangerous struggle. Gabi passed out after getting choked by her enemy, but this nightmare’s just getting started. Someone stabbed Diane with a lethal syringe while Gabi was out cold!

Days of Our Lives spoilers say Gabi will face questions and doubts on Wednesday. She’ll insist she isn’t to blame for this, but that won’t change the fact that Diane’s dead. Gabi’s the only one left in the room with the victim, so she’ll naturally face accusations. She’ll be stunned when this terrible incident delays her release.

Other Days spoilers state that Hope (Kristian Alfonso) will get some surprising updates. She’ll be shocked and skeptical when she hears Ben (Robert Scott Wilson) could go free. Ben’s doctors will apparently think he’s ready to be let back out in the world.

However, Marlena (Deidre Hall) will be the deciding vote here. She’ll be contacted about meeting with Ben and judging if he’s sane or not. Marlena will also deal with some disbelief, but Ben will try to win her over later this week.

Finally, Kayla (Mary Beth Evans) will be forced into a tricky situation. Days spoilers say she’ll seek Stefan’s (Tyler Christopher) help to get Steve’s (Stephen Nichols) sight back. Stefan owns the company that could make that happen, but he’ll want something in return.

Kayla will have no choice but to assist with Kate’s (Lauren Koslow) takedown. She’ll suck it up and pitch in for the sake of Steve’s vision. We’ll keep you posted as other DOOL news comes in. Stick with the NBC soap and don’t forget to check CDL often for the latest Days of Our Lives spoilers, updates and news.