Days of Our Lives Spoilers: Week of January 8 – Brady Theatens To Strangle Vivian, Warns Old Foe to Back Off 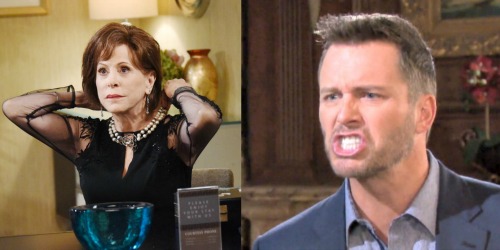 Days of Our Lives (DOOL) spoilers tease that some old foes will face off soon. The week of January 8-12 will bring plenty of Vivian (Louise Sorel) drama. While Stefan’s (Tyler Christopher) busy tormenting the DiMeras, Vivian will make her way over to the Kiriakis mansion. She’ll show up unannounced and immediately infuriate Brady (Eric Martsolf).

Eve (Kassie DePaiva) will be nearby to witness this heated confrontation. DOOL fans know there’s plenty of bad blood between Brady and Vivian. She once drove Brady to his breaking point and it didn’t turn out well for her. Vivian was trapped in a sarcophagus and later tossed on a deserted island.

If it’d been up to Brady, Vivian would’ve stayed where no one could find her. Maggie’s (Suzanne Rogers) kind heart is the only reason Vivian was rescued. Now Vivian’s back to stir up more trouble. The DiMera clan may not be the only family that’s targeted. Brady will certainly have concerns about what Vivian’s up to.

Days of Our Lives spoilers say Brady will grill Vivian about her intentions. She might make some cryptic comments and taunt Brady about her return. Naturally, Brady’s anger will erupt. It won’t be long until he snaps and attacks!

Brady will move in close and put his hands around Vivian’s neck. He won’t actually do any damage, but he’ll let her know he’s willing to. Nobody messes with Brady and gets away with it. Ever since Nicole (Arianne Zucker) broke his heart, Brady’s been a real beast!

The good news is Eve seems to find that sexy. She doesn’t mind a man who’s ruthless and assertive. Eve and Brady are a lot more alike than they realize. They’re both go-getters who refuse to sit back and suffer. These Days characters will do whatever it takes to get what they want.

Deception could hinder Brady and Eve’s budding romance, but maybe they can move past it. For now, Eve will likely approve of Brady’s threats against Vivian. She may enjoy watching Brady take charge of the situation. Days of Our Lives spoilers say Eve will continue to fall for Brady’s aggressive side.

As for Vivian, she’ll probably back off and make Brady think she won’t retaliate. In reality, Vivian may be cooking up something big! We’ll give you updates as other Days details emerge. Stick with DOOL and don’t forget to check CDL often for the latest Days of Our Lives spoilers, updates and news.