Days of Our Lives Spoilers: Week of July 2 Preview Video – Will Helps Sonny Get Rid of Leo’s Dead Body 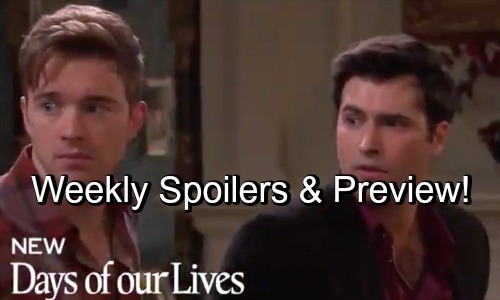 Days of Our Lives (DOOL) spoilers preview for the week of July 2-6 tease that we’ll see some startling accusations and a violent battle. The trouble’s already kicked off thanks to Leo’s (Greg Rikaart) proposal. Sonny (Freddie Smith) looked disgusted by the suggestion, so he’s sure to turn Leo down.

However, Leo will push Sonny to consider the alternative. He’ll try to make him think Titan’s fate depends on this marriage. While they’re sparring over the wedding idea, Will (Chandler Massey) will learn some disturbing information. He’ll realize Leo’s an even bigger creep than he thought.

Once Will barges in the Kiriakis mansion, he’ll make a big announcement. Will’s going to reveal proof of Leo’s awful history. This guy’s a prostitute, a con artist and all-around appalling individual. “Leo” is just some name he made up, so it’s clear that everything out of his mouth’s been a lie.

Days of Our Lives spoilers say Sonny will rip into Leo for trying to destroy his life. Next, it’ll be Will’s turn to blast him. That won’t go over very well. DOOL fans can expect Leo to lunge toward Will and grab him by the neck. Luckily, Sonny’s quick thinking will save Will from Leo’s wrath. Too bad it’ll also cause a serious disaster!

After Sonny grips Leo’s shoulders, he’ll toss him over toward the fireplace. In a freak accident, Leo will strike his head on the mantle and breathe his last breath. Days spoilers state that Will and Sonny will promptly panic. They’ll check Leo’s pulse and find nothing, so they’ll ultimately declare him dead.

Despite Will’s desire to call the cops, Sonny will want to take charge and handle this themselves. They’ll be rolling Leo’s body in a rug when Paul (Christopher Sean) shows up. Instead of dragging someone else into this, Sonny will lie that Will isn’t around and send Paul to look elsewhere. They’ll manage to keep him in the dark on the deadly drama for now.

Moments later, Maggie (Suzanne Rogers) will pop in. Days of Our Lives spoilers say she’ll have questions about the rug, but Will and Sonny will fib about a stain. They’ll claim Arianna (Harper and Sydnee Udell) spilled something, so they’re going to have it cleaned. Maggie may be a bit suspicious, but this busybody will head off to bother someone else.

The interruptions will finally die down, but they’ll still have to pull off a tricky plan. Sonny will hope to put Leo in the driver’s seat of his vehicle. He’ll think they can make it look like a car crash, but will some other snags spoil their plot? We’ll give you updates as other Days news comes in. Stick with DOOL and don’t forget to check CDL often for the latest Days of Our Lives spoilers, updates and news.