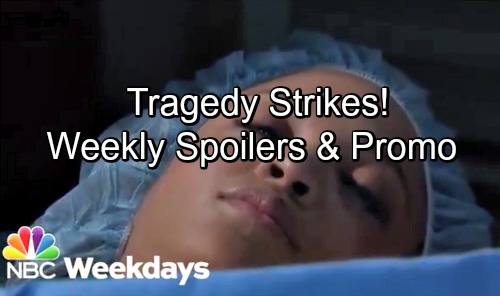 Days of Our Lives (DOOL) spoilers for the week of June 18-22 tease that some shocking moments are coming up. After JJ (Casey Moss) rushes to the hospital with Lani (Sal Stowers), Eli (Lamon Archey) will be summoned. He’ll head over to see his “baby mama” as fast as he can. There’ll definitely be some panic as everyone waits for answers.

Kayla (Mary Beth Evans) will check Lani out and break some bad news. She’ll explain that they have to deliver this baby immediately. Eli and JJ will still be in the room for updates. Since it’s too early, they’ll wonder about the kid’s odds of survival. As Lani battles intense pain, she’ll want some answers as well.

Kayla will acknowledge that there are far more risks with a premature birth. Lani’s placenta previa will make things even tougher, so Kayla won’t have high hopes. However, she’ll promise she’s going to do everything she can. Kayla would love to give Lani and Eli the family they expect, so she’ll certainly give this her all. 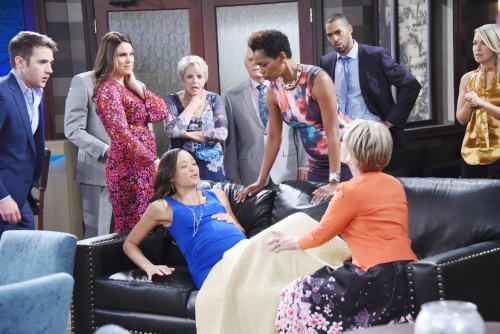 After a room’s prepped for a C-section, Kayla will announce that they have to go. Days of Our Lives spoilers say Lani will be terrified, but Eli will provide more reassurance. He’ll urge Lani to stay strong and concentrate on what’s ahead. Eli will think they have to be positive about their son or daughter’s survival.

Once Lani’s on the operating table, she’ll quickly start to bleed out. Fortunately, DOOL spoilers state that Kayla will get the situation under control. She’ll remain calm and save Lani from a grim fate. Alas, the baby won’t be as lucky.

Before we get to that devastation, let’s talk about what’ll happen in the waiting area. Several people will show up to offer support. It appears Chloe (Nadia Bjorlin), Lucas (Bryan Dattilo), Jennifer (Melissa Reeves) and Eric (Greg Vaughan) will be dining out when they receive word. They might learn what’s up from Julie (Susan Seaforth Hayes) at Doug’s Place.

At the hospital, Abe (James Reynolds) and Valerie (Vanessa Williams) will worry along with Eli. Days of Our Lives spoilers say JJ will stick around, too. He won’t want to bail on Lani’s loved ones at a time like this. It won’t be long until Julie, Doug (Bill Hayes) and the others arrive. They’ll hold hands in a circle as Eric prays for Lani and her baby.

Later, Kayla will reveal the outcome of the surgery. She’ll note that Lani’s going to be fine, but they couldn’t save her little one. Days spoilers say Eli and Lani will have to cope with this terrible blow. They’ll try to be there for each other as they press on without a child to raise.

It looks like a week of heavy drama’s in store. We’ll keep you posted as other Days details emerge. Stay tuned to DOOL and don’t forget to check CDL often for the latest Days of Our Lives spoilers, updates and news.