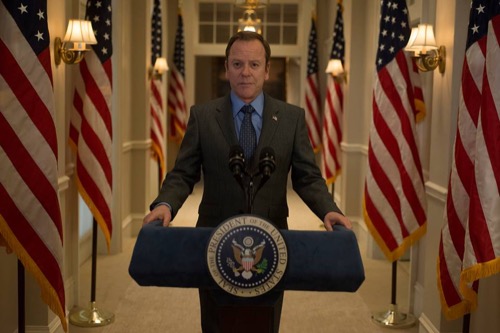 Tonight on ABC their new conspiracy thriller Designated Survivor airs with an all-new Wednesday, May 16, 2017, episode and we have your Designated Survivor recap below. On tonight’s Designated Survivor season 2 episode 22 called “Run” as per the ABC synopsis, “The Season 2 finale: As President Kirkman continues to deal with the turmoil surrounding the hacker and congressional investigation, a natural disaster threatens the lives of two White House staffers. Meanwhile, Kirkman’s closest allies are surprised when the president makes an announcement no one saw coming.”

Tom and Mike go to visit Emily in the hospital. She has 13 stitches. Tom reports back to meet with his lawyers and West to hear the charges brought against him for the actions of Hanna. If he promises not to rerun they will drop the charges. He has until the end of the day to decide.

Lyor and Seth meet with officials from Taurasi. They talk to the governor about remaining as part of the US. Meanwhile, Aaron cannot get in touch with Hanna. She has gone off the grid.

Hanna visits Damian’s daughter at private school. She enters Amy’s room. The girl in there tells her Amy has left on a spring holiday. She doesn’t know how to get in touch with her. Hanna accuses her of being Amy when the girl hits her in the face and runs.

A tsunami has been detected off the coast of Taurasi. Tom is brought to the situation room where he is told. Lyor and Seth are missing. There are 15k tourists that need help and 8k locals. Tom meets with some senators. They offer $3 million only, pointing out that Taurasi wanted to cut ties with the US.

Emily has returned back to work. Kendra brings her the news that Lyor and Seth are still missing.

Hanna tracks down Amy. She runs but is cornered. Hanna proves she knew Damian and tells Amy she needs to protect her from someone who is looking for her. Amy goes with her.

Lyor informs the team he is safe but Seth is still missing.

Amy and Hanna are headed to Damian’s storage.  Meanwhile, Tom meets with the governor video to tell him he is trying to get more aid.

Hanna and Amy arrive at Damian’s safe. It has been broken into. Amy tells her there was a list inside of names and she has memorized all of them.

Emily has gone behind Tom’s back at an event and has asked for funding. Tom is angry.

Tom speaks with Emily. He tells her that he cannot have her talking to the Chief Justice. He is already in legal turmoil. Kendra comes in with bad news – he cannot get the aid he wanted.

Lyor finds Seth. He is okay. They both meet with Tom video along with the governor who must put on paper that he is a protector of the US. That way Tom can get him aid. He does so. Tom brings it to the senators. They cannot believe he is asking for $3 billion.

Tom and his son talk about Stanford. Tom has known for a while. He wants him to go. His son wants to stay with him and Penny, his sister. But Tom insists he go.

Hanna brings Amy back to her dorm. She wants Valera, the enemy, to know she is home. She wants her to come so she can take her out.

Emily gives Tom her resignation. She has made too many mistakes. Tom has a hard time accepting her letter, but does.

West arrives to see Tom. He tells him that he was given a job offer. He doesn’t want to take it. It has made him realize that everyone around him is a schemer. But Tom isn’t.

Valera shows up. They fight. Valera stabs Hanna in the leg. She chases after her. Hanna is forced to shoot her dead.

Tom tells the governor that aid is on the way. Meanwhile, Hanna takes Amy with her home. Seth tells Lyor he is glad that he is okay. Lyor gets awkward.

Tom arrives at his press conference. He addresses the nation. He announces he will run for re-election as an independent.

Hanna plugs in the zip drive she took from Valera after she shot her. Emily is seen in a video giving Valera something.