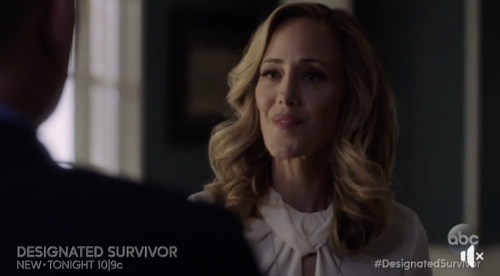 Tonight on ABC their new conspiracy thriller Designated Survivor airs with an all-new Wednesday, April 4, 2017, episode and we have your Designated Survivor recap below. On tonight’s Designated Survivor season 2 episode 16 called “Fallout” as per the ABC synopsis, “President Kirkman and his staff have credible intelligence that a dirty bomb is on U.S. soil, thrusting the president into a high-stakes effort to find the bomb and stop it from detonating. Meanwhile, at the White House, Emily approaches Chuck to help her with something that has damaging and illegal consequences.”

The team learns through credible evidence that there is a dirty bomb on US soil. They act quickly, bringing the president to see the general. After he talks to him and the others, Emily tells him it is time to go. He needs to get to safety in a bunker. Lyor wants to know what he wants to tell the public. He tells him to tell Seth to dodge any questions until they know more.

Seth holds a press conference. He manages to avoid all questions about the president’s recent cancellations, making jokes.

The president meets with Dr. Frost. He asks her to help them locate the bomber after she previously worked with them trying to locate radioactive waste.

Lyor tells Seth they need to head to the bunker. As Seth types, Lyor talks about dying in the bunker, they will have to eat one another becoming succumbing to microbes. Lyor leaves. A reporter comes in and threatens Seth. He knows something is going on.

Aaron calls Hannah. Frost gave them a lead on an ex-con who might be behind the bomb. Meanwhile, Hannah gets a call from a coworker. Their asset who was in the hospital has escaped. She calls Aaron to tell him.

Seth meets with the president and the others. The president thinks he needs to give a photo op. Mike is hesitant but says yes.

Kendra meets with Emily. She is concerned that the phone records Emily got her with the help of Chuck were obtained illegally. Emily doesn’t know what the big deal is.

Chuck gets a file in from Frost. She has sent them the location of the bomber. Hannah and the others head there. There isn’t evidence inside but a man named Joon.

In the bunker, the president sits with his VP. They talk. She admits she has no interest in becoming president.

Hannah questions Joon. They want to know why he was in the warehouse where they know the bomber was yesterday. He won’t tell them why.

The reporter comes back to Seth. He has all he needs even if Seth wants to keep lying. Meanwhile, Frost and the president are in the bunker. She asks him why he called her to come help. He tells her that she is brilliant. As they talk, frost pinpoints the bomber’s location. He is near a commuter rail. Hannah and the crew get there quickly and find a bomb in a vehicle. They try to shut it down. They are successful.

John comes to see Hannah. He tells her he wasn’t on a crusade to take down the president. She tells him he needs to talk to Kirkman about that.

Seth holds a press conference. He is successful until reporters start asking about President Moss’ misconduct. Kendra catches on. She heads to see Emily. She knows she is the one who leaked information about Moss.

John goes to meet the president. He asks for forgiveness. The president is willing to give it.

Chuck manages to hack into the van’s GPS that had the bomb in it. Hannah and Aaron head to the address quickly. There is a man there that is dead and the revelation that there is still a bomb out there in the subway. Hannah calls John and warns him. He runs to the subway to clear out anywhere there. The building explodes.

The president holds a press conference. Meanwhile, Hannah gets Joon to break. He reveals a man threatened him. He would kill his girlfriend if he didn’t cooperate. They track the bomber’s bank accounts. It looks like it is the Kumani government. The president meets with the ambassador. He refuses to accept that his government would so this.

The president heads to the general. He doesn’t want to wait to react. The US was attacked. He tells them he has made his decision. The orders to engage are sent.