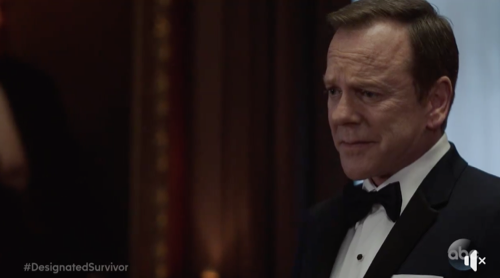 Tonight on ABC their new conspiracy thriller Designated Survivor airs with an all-new Wednesday, May 2, 2017, episode and we have your Designated Survivor recap below. On tonight’s Designated Survivor season 2 episode 20 called “Bad Reception” as per the ABC synopsis, “President Kirkman negotiates with a foreign government to release an American held overseas, while attorney Ethan West continues his investigation.”

Tom and the team arrive at a reception with their biggest financial supporters and influential leaders. Tom speaks with an ambassador about a teen Matthew Jennings who is being used as leverage over the Pulu Islands Tom does not want to be destroyed. Meanwhile, Emily and Kendra meet with a former judge to ask him if he will serve the president. He agrees.

Hanna meets with a man who knows Tom and the Andrea Frost. She wants him to meet with Frost for dinner so that she can go to her apartment. Meanwhile, Tom catches wind that Ethan has suggested to the ambassador that Tom may give in on the islands in exchange for the release of Jennings. Tom pulls Ethan aside. In the other room, the ambassador suddenly faints. They run to him. He doesn’t have a pulse.

The next day, the team meets. The ambassador was poisoned. They hear that Jennings has been sentenced to 20 years hard labor. The Prime Minister offers to help the young man if Tom helps him. Tom tells Aaron and Emily they have to do something to help Jennings. Meanwhile, Mike and Chuck look into the ambassador’s lavish lifestyle and learn his owns many people millions.

Chuck assists Hanna remotely as she breaks into Frost’s house. She discovers a large room full of computers. Chuck thinks this is where she performs all of her hacking.

Tom and Jennings talk via video. They lose their connection. Tom realizes he cannot give in to them and their deal for the islands. He will get Jennings back.

Hanna works to get into the system at Frosts. She is running out of time.

The team talks about the judge Tom has offered a position. He has a sexual discrimination incident in his file. Seth knows the woman who filed against him. They used to work together. He calls her in. She tells him she was passed up for a promotion after he asked her out and she declined.

Kendra tells Emily that 10 years prior she had a fling with the judge. Emily tells her as long as it was consensual. Mike learns that the ambassador was poisoned hours before he shows up at the white house. They figure out that the ambassador was in litigation with his neighbor who he met on the same day. The video shows the man slipping something into his drink. They call the man in. He tries to deny it at first until he sees the video.

Tom discovers that Ethan went to college with Jennings’ aunt. Tom wants to know the story. He calls Ethan in. Ethan tells him his aunt died because of him. He was supposed to meet her at a bar one night. He was running late. She was murdered.

Kendra meets the judge for drinks after learning he has one other incident in his report.

Ethan chats by video with the prime minister and Tom. He tells the PM he plans to sue their country after they damaged the islands unless Jennings is released. Ethan thanks Tom for helping him make things right.

Kendra is back at the white house. She tells Emily she pulled the offer to the judge. She doesn’t want to take a chance. Emily tells her she needs to go with her gut.

Mike reports to Tom. Dax is here. Tom is speechless when he talks to him. He has discovered that Dax was behind the hacking, not Frost. He cannot believe it. They were close friends. Hanna comes in. Her firing was staged so they could check his home. He is taken away by the secret service.

Mike talks to Chuck. He thinks it is great he watches out for Hannah but he needs to watch out her himself. Tom meets with Andrea. She is sorry to hear about Dax. She tells him she is moving to San Francisco. He hugs her goodbye.

The hacking case isn’t over for her, she tells Aaron, before she turns in her badge.