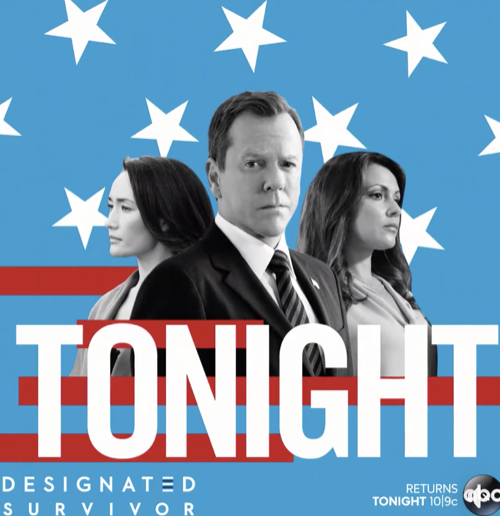 Tonight on ABC their new conspiracy thriller Designated Survivor airs with an all-new Wednesday, February 28, 2018, episode and we have your Designated Survivor recap below. On tonight’s Designated Survivor season 2 episode 11 called “Grief,” as per the ABC synopsis, “In the Season 2 mid-season premiere, President Kirkman’s senior staff insist he seek professional help in dealing with the loss of Alex, forcing him to reluctantly see a therapist. Meanwhile, FBI Agent Hannah Wells and Aaron Shore travel to Cuba as part of a trade delegation, but the trip does not go according to plan.

Tom is meeting with his therapist who is asking him about Alex’s death and the man who ran a red light and killed her. A knock on the door comes. Delegation is here, an assistant tells him. Tom tells his therapist he needs to reschedule.

Emily deals with the team. They are concerned about the president and the paperwork that is piling up. Emily reminds them that it has only been 10 weeks since Alex was killed. Meanwhile, Aaron tells Hannah she is back on probation following the death of Damian.

Emily and Seth meet in the office. He wants to go on vacation but she isn’t sure she can get away. He begs her to.

Tom is back in the chair. His therapist asks him who he blames for Alex’s death. Tom recalls when he became president. He blames himself.

Hannah and Aaron are traveling on a bus in Cuba for trade delegations when the bus is taken hostage by men with machine guns. The men know that Aaron is from the White House. Aaron can understand what they are saying. They plan on killing them all. Hannah asks them to release the children and the elderly. They aren’t willing to.

Back at the White House, Tom is briefed about Hannah and Aaron but is reluctant to make a hard decision. The team is getting nervous about his abilities. He hasn’t been his normal confident self since Alex died.

Seth addresses a room of reporters. They want to know what the president plans to do to save the hostages in Cuba. Seth cracks a bit under pressure and fires back. When he gets odd the

Tom is listening to the last voicemail Alex left him over and over. He heads back to therapy. He is asked about his kids. He doesn’t want to talk about he tells the therapist as he recalls in his mind telling his daughter that her mother is dead. They cry together. He rocks her. Leo was in shock. He lashed out at Tom telling him that his mom hated it at the white house.

Hannah asks to go to the bathroom. She escapes to the outside while Aaron stages a fake fight. She runs for it but doesn’t get far when she runs into two men with guns. She takes them out but is suddenly surrounded by a dozen more.

Tom thinks back to when Emily helped him plan Alex’s funeral. He had a hard time focusing. He admits that his wife’s death did traumatize him but he will not let that affect his decision making as the president.

In the situation room, Tom tells the general to move forward with taking control of the hostage situation. He doesn’t want to pay a ransom after all.

Tom talks with the hostages by video as they threaten Hannah’s life. The video feed cuts out but Emily picks up on a signal Hannah gives, the sign of the cross. They connect it to an investor with the last name Cross. They dig into his background and realize that the Cuban president is paying of the rebels who have taken Hannah and Aaron and the others hostage.

Tom confronts Ortega by a video about his collusion. He tries to deny it but Tom tells him he is going to let the Cuban people get their own justice.

Tom meets with the man who killed Alex in jail. He will make it his mission to ensure that the man knows what he did wrong and what he took away from Tom and his family.

Hannah is putting on night cream when Damian comes up behind her with a gun. He tells her they need to talk.