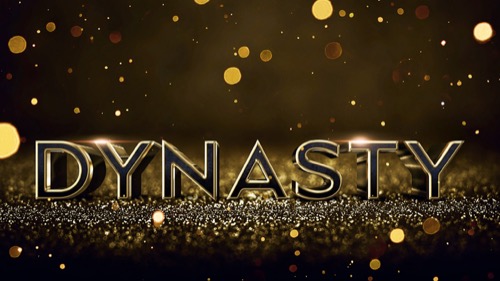 Tonight on the CW Dynasty the reboot of the 1980 series that followed the Carrington family airs with an all new Friday, October 12, 2018, episode and we have your Dynasty recap below.  On tonight’s Dynasty season 2 episode 1 “Twenty-Three Skidoo,” as per the CW synopsis, “SEASON PREMIERE – On the eve of Carrington Atlantic’s 100th anniversary, our splintered family struggles to rise from the ashes to redefine themselves as past mistakes emerge, new alliances are forged, and the fate of the Carringtons’ legacy falls squarely on Fallon’s (Elizabeth Gillies) shoulders.”

We see Cristal on the floor passed out in the middle of the fire. Fallon is leaving in a limo and reporters are everywhere. Jeff is asked if he is a Carrington now and he says hell no, he and his sister do not consider themselves Carringtons.

Michael tells Fallon that her father is on the way home, she is not surprised, when it comes to the company he is there, but when it is family he is not. Michael tells her that he is proud of her even if Blake isn’t.

Meanwhile, the nationwide manhunt continues for Hank Sullivan, the person of interest in Cristal’s homicide.

Alexis has made a full recovery and her nurse tells her it is time to go and take all the flowers that she ordered for herself.

Steven is with Melissa and she doesn’t want to lie about the fact that he is the father now that her divorce is filed. Steven tells her that he doesn’t know how to tell Sam. Melissa says that she sympathetic, but the longer it takes for the truth to come, the worse it is going to be.

Liam is with Fallon and his uncle Max arrives and is happy to meet Fallon, he tells her that he is sorry for what happened to her family. Max drops that Liam has a wife who is heir to an empire that he wants to buy, Fallon is shocked!

Alexis is on the phone with Hank and he says he didn’t shoot Cristal, he just torched the place like she ordered. Alexis says she never told him to torch the place, she told him to watch her and keep things quiet. Hank wants five billion dollars, Alex says she doesn’t have it, then he says one million. Alexis goes on to say she doesn’t have it because he burned down her home with everything in it. Hank gives her 38 hours, or he is going to the cops.

Alexis arrives and tells Fallon that since her home burned down, she is sure she won’t mind her staying there. Sam comes downstairs and asks Alexis why she trash talked his mom when Steven jumps and stops him. All voices are raised and Blake walks in the door. Alexis backs up her wheelchair and bangs a table that was holding Cristal’s ashes, they smash on the floor. Blake walks out and slams the door, Alexis says, “oops.”

Joseph interrupts a party that Kirby was having, she tells him that he can’t hide her forever. He agrees, but he must hide her until a suspect is found. Kirby says Fallon framed her and she is trying to move on. Furthermore, she thinks he is protecting them from her and it should be the other way around.

In the morning, Blake wakes up hungover in his office, Fallon and Alexis come in. Alexis asks for the insurance money from the stables because the deed was in her name, he says it is fair. Steven walks in and says there are lawsuits, Blake says he will take care of it. Then Steven says that he may have gotten someone pregnant and everyone is shocked. Steven says that Sam doesn’t know about it and he wants to know what is fair in terms of child support. Fallon tells Blake that is one hitch with Max, he still thinks she is married to Liam. Joseph walks in and tells Blake there is a woman there to see him, Cristal Flores.

Everyone heads to the door, the woman at the door says she is the real Cristal Flores and her identity was stolen. Blake tells Joseph to give the woman 500k and get rid of her.

Fallon is Max when Michael walks up, then Liam. Max is surprised that Liam only gives Fallon a peck on the cheek. Max encourages Michael to give her a kiss on the lips.

Steven tells Fallon that he is worried about Blake.

The next morning Blake is passed out on the floor with his dog and Joseph comes in to tell him there is a slight issue at the gate. Handing that check out to the women has caused a crowd looking for handouts. Blake tells Joseph just to pay them what they want and get them out of there. One guy tells Blake to wake up, he was played by his wife, Blake hits the guy.

Party time, Fallon opens it up with a song, Max tells her that she was great. Fallon tells Liam to show his uncle where the bar is so she can welcome Nic who arrives with a parrot on his shoulder.
Steven walks in and Melissa is with Sam and she has let the cat out of the bag that she is pregnant, Steven is not pleased.

Joseph catches Kirby in Fallon’s room and tells her that she has no right to be there. She asks him if Carrington is going to let her stay there, he says he denied his request but Kirby doesn’t think he asked him at all. Joseph says that he is doing this to protect her.

Hank shows up at the party, Alexis is furious, he grabs her by the neck and tells her she has a few days or he is going to the cops.

Liam asks Fallon who she was talking to, she says that she is entertaining other offers; Max doesn’t understand because his uncle is ready to sign. Liam starts to talk about the kiss and says she knows she made the wrong decision, she felt exactly what he did.

Blake recognizes Nic and they both have words. Nic says that he is going to buy his company from underneath him, Fallon agreed and they will let Blake stay in the company for one year as his slave.Alexes tells Blake she needs something, he says let me guess, money, you should have a t-shirt made.Blake finds out that Melissa is the woman carrying Steven’s baby, he tells him that he is not the son he raised.

Blake finds Fallon and asks her if she offered him on a platter to Nic. Blake says he is not letting his family fall victim to the Russian rat. Fallon tells him off and tells her that she is the one that had to be the adult and she doesn’t need his permission.

Blake takes the microphone and toasts his family. He thanks Sam and says that his aunt would have been proud of him. Then he says not everyone chooses a husband who has a baby on the way, meaning Steven. He also thanks Fallon for keeping the company running while he was gone, she is in love and she reaps what she sows, and then he says that he is proud to say that they are selling the business to her husband’s family, the VanKirks. Max is thrilled, Nic is furious. Blake says he is getting the hell out, he intends to spend every dime he has because he can’t take it with him and his spoiled children don’t deserve it. Then Blake says, bite me.

Fallon is with Michael and he proposed to her, she is shocked and wonders how he could afford the ring, he says her father gave it to him. Fallon asks if he is sure because she has a long list of flaws, he assured her that he is sure. She takes off her ring on her finger and replaces it with Michael’s,

Blake catches Alexis trying to break into Cristal’s safe, Blake calls her a whore. Alexis tells him that all he does is throw money at his problems, he says it is true, he opens the safe and throws the money at her and then the two are making out.

Liam takes Fallon to a meeting and she is surprised that there is a private jet waiting, the meeting is in New York.