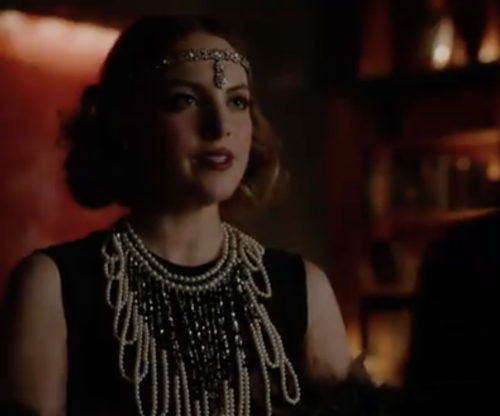 Tonight on the CW Dynasty the reboot of the 1980 series that followed the Carrington family airs with an all new Friday, October 19, 2018, episode and we have your Dynasty recap below.  On tonight’s Dynasty season 2 episode 2 “Ship of Vipers,” as per the CW synopsis, “Blake focuses on his own selfish endeavors, while Fallon goes to desperate measures to sell Carrington Atlantic to the Van Kirks. Sam and Alexis are determined to validate their suspicions about Melissa. Meanwhile, Anders’ daughter Kirby befriends the Colbys in order to seek revenge on Fallon to make her pay for the past.”

Liam notices Fallon’s ring, she tells him that she is engaged and it was replaced when Michael proposed to her.

At breakfast, Blake announces to the family that when he dies the family will get no money from him because they have enough. Any money left over will be buried with him. Alexis shows up for breakfast and Fallon tells her that she can see her nipples, the Anders offers her a robe but she refuses.

Monica is with Jeff and tells him that like him she wants to build a real name for them outside the Carringtons with their new club, just when Colby walks out in a towel and offers to help them with the club. Colby leaves the room and Monica tells Jeff that she can’t believe he slept with her and does she have to remind him that she almost burned down Carrington manor. Jeff says it was a long time ago and people like to play with fire.

Crystal Jennings tries to call Blake, but she doesn’t get through with Anders.

Sam goes to see Crystal and tells her that he is worried about what she told him about Melissa that she is a liar. Crystal tells him that she slept with Steven when he was only 18 and she is not getting any money in the divorce.

Fallon is at an event and Max walks up and makes a toast to Liam and Fallon’s marriage. Moira is rude to Fallon but Liam tells Fallon that she is harmless and Max apologizes for his wife and says she is exhausted. Fallon doesn’t care, she doesn’t want the VanKirk deal to be jeopardized. All Fallon can thing about is sealing the deal and Max wants to chill.

Melissa is with Sam and Steven and she asks him his advice about things they are adding to the baby registry. Sam asks Melissa how she is feeling, she says great. Melissa wants Steven to join her for the prenatal class, Sam says they can do it right in the mansion.

Blake is with Anders, he is looking for a new car and tells Anders he is serious about spending all his money.

Alexis gives Hank a Rembrandt as collateral until she gets him the money next month. She tells him to lay low or the two of them are going to land in jail.

Max is impressed with Fallon’s ring, little does he know that Liam didn’t give it to her. When Liam gets up to take a call, Max gives her a key to meet him at his house in the Hamptons, alone. When Max gets up to leave, Fallon gives him his key in front of Liam and says she thinks he dropped it, acting like she didn’t know where it came from.

Sam is following Melissa and reporting back to Alexis.

Fallon and Liam are in a limo and he gets a text from his uncle, he is meeting with NorthStone Oil and Fallon knows who they are. Fallon is surprised that he is meeting with another energy company when he is about to acquire Carrington Atlantic.

Blake is playing golf in his office when Anders walks in and tells him that Jeff Colby is about to buy the car he wants.

Fallon changes her mind, she calls Max and tells him to leave the key with the doorman, she will be there.

Kirby plants some rats in Purgatory and calls one of them Fallon. Kirby then tells Monica that Purgatory got shut down by the health department because of an anonymous tip and denies having anything to do with it.

Anders tells Steven that he owes it to the baby to do his best.

Liam and Fallon are walking and he tells her that everything is on track, she tells him that she is happy, now she can make her spa appointment.

Fallon hires a double to sleep with Max, if it goes that far when she meets with him.

Blake goes to see Jeff about his buying the car, tells him to name his price. Jeff says it is not for sale, so Blake says that he will race him for it. Jeff says that he wants to raise the stakes a little.

Fallon is with Max and he is already hitting on her. They are drinking wine and Fallon blindfolds him and handcuffs him.

Fallon switches out with her double and leaves.

Alexis is with Sam and they break into Melissa’s house and Alexis finds a fake baby bump.

Fallon and Michael head to the club and meet up with Kirby, she is wearing Fallon’s dress and her grandmother’s necklace. The two get into a catfight on the stairs and take it to the ground. Meanwhile, Monica and Steven are in a class when Alexis walks in and calls Monica a lying bitch and rips open her dress, she is really pregnant. Fallon and Kirby are still fighting and Kirby says she is going to take all her friends and her whole world. Monica blames Fallon for the fight and tells her to get out, she gives her a cheque for her contribution and tells her that Kirby doesn’t work there.

Blake is back home, he hurt his wrist. Anders tells him that he is acting like a child.

Crystal Jennings sneaks into Blake’s house by disguising herself as a nurse. She says that she is a friend of his wife and she thinks she wanted her to be there to help him.

The police arrest Kirby for assault and she is surprised.

Fallon gets a call by the girl that was impersonating her and having sex with Max, he started to turn red and had a heart attack, he is dead.