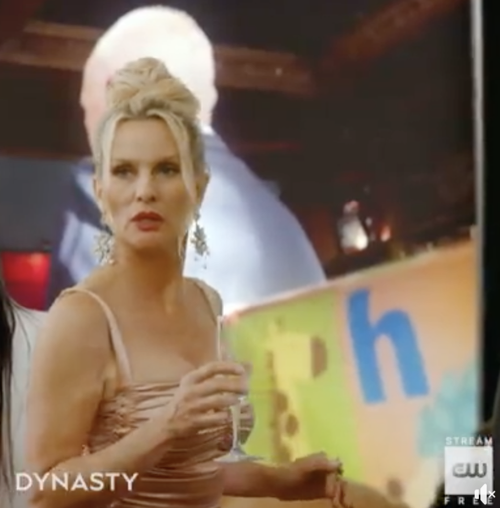 Tonight on the CW Dynasty the reboot of the 1980 series that followed the Carrington family airs with an all new Friday, November 02, 2018, episode and we have your Dynasty recap below.  On tonight’s Dynasty season 2 episode 4 “Snowflakes in Hell,” as per the CW synopsis, “After an earth-shattering reveal, the Carringtons scramble to keep the family together on an expedition abroad, with Fallon playing the unlikely role of peacemaker. Meanwhile, back home, Culhane is coerced into a dangerous endeavor.”

Fallon throws Alexis out of the manor and tells her she is banished from the house. Steven wants to put a stop to it, even though she lied to him about who his dad was, she is still his mother.

Steven goes downstairs and meets Blake in the hallway, he tells him that he is still his dad regardless. Blake says he can’t even picture Alexis with Anders. He goes on to say that Anders is going to pay for what he did,

Fallon has Alexis’ cheque from the insurance company for the fire, it is 200k rather than a million, she drops it to the ground in front of Alexis. Alexis tries to explain herself on what happened with Steven, she says it was a dark time. She goes on to say that she doesn’t even remember how they ended up together.

Steven goes to speak to Anders, he can’t remember how he ended up with Alexis either. Anders says he asked Alexis about Steven many times and she always denied it. Steven asks Anders why he never requested a paternity test, he says he didn’t know what would happen if he was right and he always loved him as his own anyway – he raised him too. Steven says he doesn’t know if he can stay, he needs to process everything, Anders tells to just focus on himself and Sam.

Anders goes to see Blake and tells him that he didn’t sleep all night, they have to talk. Blake says of course, the devil never sleeps. Anders wants to hand in his resignation, but first he wants to explain. Blake says he accepts and he can leave after he finds a suitable replacement that understands loyalty.

Blake, Jeff and Blake finalize the sale of the company to VanKirk Industries.

Sam is getting a photo done when Fallon walks in and tells Steven he missed him at the signing. Steven tells Fallon that he has decided to travel, doing what he loves and invest his portion of the payout into his foundation. Sam says they are going to start their new life as a new activist power couple of the world. Fallon tells Steven that he is running away.

Jeff and Kirby toast, he tells her that Fallon threw out Alexis.

Fallon vents to Michael about Steven wanting to leave.

Ada calls Michael, he says he got her package, he opens it up and it is full of money. Ada tells him that she got him into an underground poker game. Michael is wondering why someone in the antique business would be interested in a poker game. Ada tells him to wear the ear piece and if he doesn’t, she is going to speak to Fallon.

Fallon asks Steven to speak with her, she wants advice about how to invest her money. What Fallon really does is show Steven that there are lots of ways he can invest his money right near home and now run all the way to South America. Fallon then shows him a letter that he wrote her in elementary school where he promised to go on all adventures with her for the rest of their lives. Finally, Steven breaks down and says that maybe he can postpone South America, Fallon is thrilled. Steven notices ink on Fallon’s arm and realizes that he never wrote that letter, it is new – he gets up and walks away but tells Fallon that he is happy that he is not a Carrington.

Sam tells Alexis that he and Steven are leaving, she says that they can’t, her relationship is fragile with Steven and she needs time with him.

Kirby asks Anders how does he think she feels when he sent his daughter away for his son.

Blake is upset and throws a glass. Anders tells him that he is making it difficult for him to find a replacement, Blake throws something else.

The next morning, Fallon wakes up and Steven is gone. She tells Michael that she needs his help, he says that he can’t because he is busy.

Steven and Sam are in South America when Fallon shows up with Anders and Blake. Then, Alexis shows up. Fallon tells Steven that they are there to help and are not leaving.

Michael arrives at the poker game, Ada wants him to steal some ledgers. Michael excuses himself from the game and goes to request a drink, then he slips into a room and takes photos of the ledger. Two guys come in and catch him, tell him to go back to the game – but they are keeping a close eye on him.

In South America, Blake continues to try to make Anders suffer by being rude to him in from everyone. Alexis asks where the hotel is, Fallon tells her that she is sleeping in a tent like everyone else.

The next morning, Fallon can’t find Alexis. Overnight, Alexis calls in people and builds a huge tent with staff to pamper everyone, Steven is not impressed.

Michael heads out to leave, Jeff is there with a woman and Michael picks a fight with him – they leave. All of a sudden the FBI arrive, Michael and Jeff are lucky that they were out.

More items arrive in South America, Alexis stole Steven’s credit card. Steven tells her off, says she pretends to care and all she does is use them. Anders tries to speak to Blake, but it turns into an argument, Fallon tries to be the peacekeeper. Steven says that he is the only peacekeeper and he is tired of it. Fallon says she is going to finish building the house if it kills her and tells everyone to help out, she staples Alexis’ robe to a wood board so she can’t move. Steven and Fallon make up, then a wall of he house falls – Steven turns to Fallon and says lets go home.

Everyone returns home, Blake finds Cristal in the library when he gets there. She tells him that she heard about his son and she is sorry. Cristal says it was fate that brought her back, he says that he is not convinced that it was fate.

Ada calls Michael and he tells her that they are done. She reminds him that he just broke the law. Michael says he is leaving and going to Atlanta, she says he works for her now and he is going all in.

Kirby calls Alexis, she was the one who made the purchases on Steven’s credit card to set Alexis up.

Michael tells Fallon that he didn’t get the job. She offers to make some calls, he tells her not to.

Blake is polishing his guns, he asks Anders if he called Cristal. Anders says he is leaving, Blake says that he wants him to stay, they are family.

Steven is playing the piano and singing when Fallon walks up and tells him that he should sing more often. She goes on to tell him that he needs to go, she doesn’t want him to, but he should. Steven tells her that she is the strongest person he knows. He then tells her to reconcile with mom, for him. Fallon says ok, on one condition, he finishes the song.

Fallon has tea with Alexis to make up.

Steven tells Sam that he needs to go back to South America by himself and will return by Christmas stronger for him.