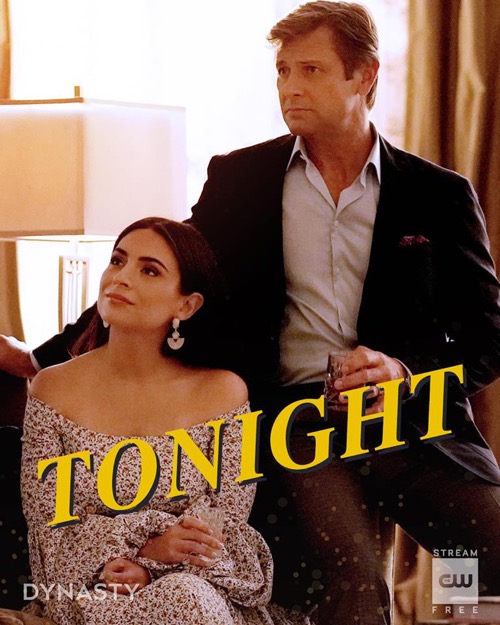 Tonight on the CW Dynasty the reboot of the 1980 series that followed the Carrington family airs with an all-new Friday, November 09, 2018, episode and we have your Dynasty recap below.  On tonight’s Dynasty season 2 episode 5 “Queen of Cups,” as per the CW synopsis, “Even as Fallon commits her heart to Culhane, forces she can’t see, and some she can, pull her away. Alexis seemingly makes inroads with Blake but she doesn’t realize she’s pushing him into Cristal’s arms.”

Cristal has been with Blake for a few days and she is really enjoying herself.

Photos are surfacing of Fallon and Michael, but she is not worried, the merger is done and she doesn’t care what it does to her husband or her marriage.

Michael is with Jeff and he invites him to one of his poker games. Michael tells Jeff everything about Ada and thinks Jeff shouldn’t host the game. Jeff doesn’t care, he is not going to let someone scare him.

Alexis exchanges some sarcastic comments with Cristal. Blake finds out that a painting of his is missing and Hank showed up at a gallery trying to sell it. Blake is upset, he thinks Hank killed his wife.

Sam is missing Steven, Cristal suggests that he should see a psychic to tell him about his future with Steven.

Fallon is with Michael and Liam, she tells them that she can’t marry Michael unless she divorces Liam and they need to have a divorce party to end things and move on. Liam says he will be there, it will be like the wedding they never had.

Hank calls Alexis, he tells her that the painting is worth millions, she begs him not to sell it.

Michael meets Keith who asks him if he set him up. Michael tells him that Jeff Colby is hosting a game and he needs all the contacts names.

Cristal asks Blake if he is a control freak. She tells him that he can’t control how people react, and he has to open his heart and let her in.

At Fallon’s divorce party, Michael has to leave and Sam announces that he has a special guest, a psychic that he flew in from Paris. Fallon says they have plenty of scam artists right in the city. Alexis arrives, the psychic welcomes her and calls her the matriarch that nobody wants there.

The psychic reads cards for Fallon, she says there is a powerful betrayal around a bare-chested man and only the ultimate kiss will tell her whose love is true. Falon brushes it off. Sam is next, he gets the promise of growth, as in new a new life, and Anders plays a huge role in his journey. Blake is next, he gets a path forward, there are peace, forgiveness and a new chapter. Alexis calls it parlor tricks and snake oil. Alexis is next, a past mistake comes back to haunt her, and a man is a great danger to all Carringtons.

Kirby asks Jeff to grab a bite, but he turns her down because he has a lot going on. Kirby sees that he is going to have a poker game and asks if she can work it to make money.

Michael’s phone is ringing, it is Ada and Fallon picks up, She tells her to give Michael a message that his close friend called.

Sam thinks he needs to focus on his baby with Steven and interviews women to be a surrogate. The response has been insane and he inlists Anders help to interview them.

Fallon tells Monica that she thinks Michael is cheating on her.

Fallon confronts Michael about the phone call from the woman, he denies that he is having an affair.

Fallon is doing her best to be at the party while Michael sneaks around from the poker game to the party.

Blake shows up at the gallery and thinks he caught Hank selling the Rembrandt, when he pulls down his hood, it is Alexis. Alexis blames Blake for making him go to such lengths, he says that he didn’t make her steal. Blake says that he should have been more considerate, and he forgives her for her mistakes.

Ada threatens Jeff and tells him that she wants 40% every week. Jeff tells her that they recorded the whole thing, but Ada has her own people and tape is erased.

Cristal is fixing Blake a snack. Alexis walks in and calls her a gold digger.

At the party, Fallon and Liam are on stage and he plays a slide show, when it is going he tells Fallon that he loves her. Liam then makes an endearing speech and Fallon is touched. Fallon leans in, grabs Liam and kisses him – then says for the shareholders.

Fallon runs off and Liam runs after her in a room, they continue kissing and she sees Michael on a TV screen with Ada.

Jeff catches Fallon with Liam, she begs him not to tell Michael.

Kirby is upset, she only got $50 in tips. She sits down with Sam and he tells her that all the surrogates are trash. Then Sam tells her that she would be the perfect surrogate.

Cristal tells Blake that they need to talk about Alexis. Blake tells her that she is changing her life by teaching him how to deal with Alexis. Cristal tells him that she lost her job in Arizona, they closed the clinic. She admits that she had nowhere else to go. Blake tells her that she is now where she belongs, then he leans out and kisses her and calls her his destiny while Alexis looks on.

Alexis goes back to the psychic and she is told that an old friend, someone who Alexis wants very much, is full of passion but no fulfillment. She goes on to say she just sees deciet and a man is going to ask her to marry him but he is going to expire.

Hank didn’t get the money, and Claudia tells him now it is going to be her way.