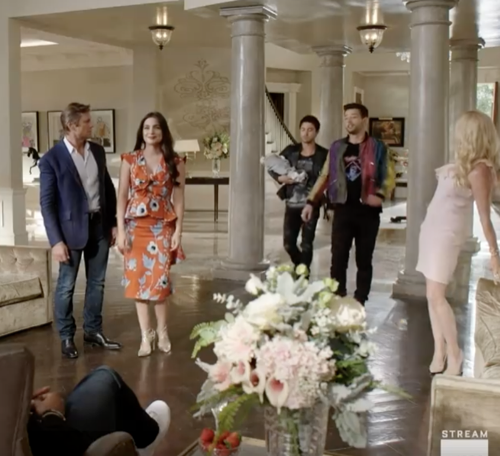 Tonight on the CW Dynasty the reboot of the 1980 series that followed the Carrington family airs with an all-new Friday, December 7, 2018, episode and we have your Dynasty recap below.  On tonight’s Dynasty season 2 episode 8 “A Real Instinct for the Jugular,” as per the CW synopsis, “Fallon recruits her mother’s help with wedding planning, only to realize that Alexis may have ulterior motives. Desperately missing Steven, Sam develops a complicated relationship with a member of the Carrington staff. Culhane discovers his dark side as he ventures into a new business partnership.”

Fallon had her wedding planner put together a human Pinterest board so she and Culhane, so they can visualize their big day; he thinks it is a bit over the top.

Sam tells Alexis that having the fake baby Jesus in her trailer means that she had to have something to do with the baby. Alexis tells him that he is right, Hank left the baby at her doorstep. Alexis explains that Hank knocked up and an unfit mother. Sam agrees to keep it between them.

Blake and Cristal come in to see Fallon during her human Pinterest boards and tells her that he thinks he should do the last toast, skip Alexis and make Cristal a bridesmaid. Alexis walks in, then Sam with the baby and his new nanny, Manny. Everyone tries to give Fallon their input on the wedding and Fallon tells them that their jobs are to show up and shut up. To that, Cristal tells everyone that it is Fallon’s special day and they should do whatever she wants.

Cristal is alone with Alexis who tells her to stop smooching her daughter’s butt.

Fallon wants to get married in the Swan House because Grandma Carrington got married there, but there is already another wedding scheduled on her date, it is Mimi Rose Prescott.

Fallon goes to see Alexis and asks her to convince Mimi not to get married in the Swan House.

Culhane is summoned by Ava, he tells her that he is only doing this job because she promised him the blackmail on Fallon and the videotape of Jeff’s poker game. Ava tells him that all he has to do is pick up a shipment of antiques and his job is done.

Alexis, Fallon, and Mimi meet for tea. Mimi announces that she is getting married in the Swan House, Alexis says, “that old place” and tries to downplay it, then says she has a connection at the Hildebrand. Mimi tells the two that they are transparent, she knows they want the Swan House.

Anders approaches Cristal and tells her that since she is now engaged to Blake, he would like to get to know her better so he can cater to her wants and needs. Anders starts to ask questions about her family, friends, previous employers; but she won’t budge with any information.

Manny is taking care of the baby, Kirby walks in and flirts with him when he walks out, Sam tells her to back off.

Alexis tells Fallon that she is close to breaking Mimi. Fallon says she was on the phone with the president of the historical society, he owns the Swan House and she is going to make him an offer that he will be unable to resist. Alexis tells her not to, she wants to do this for her. Fallon invites her to pick out her dress when they get there, Cristal is there, Fallon invited her as well, a trade off for Blake not speaking at the wedding.

Culhane is delivering the antiques when he is stopped at customs and they want to inspect the truck contents.

Fallon gets mad at Alexis because instead of trying to help her get the Swan House, Alexis gets Mimi to help her get back into society. Fallon tells Alexis that she is no longer invited to the wedding.

Culhane threatens to call his lawyer, he tells border patrol that he knows he was pulled over because he is black.

Sam goes down to the pool, Manny is there, he comes out of the pool and flirts with Sam.

Fallon can’t get her venue, the owner won’t sell it. Cristal tells her that it doesn’t matter where she gets married, it’s the people that matter.

Sam tells Kirby that Manuel came on to him and doesn’t know what to do. Kirby says that he was about to come on to her as well, so obviously he plays for both teams. Kirby tells him to go through his wedding album to remind him who his heart belongs to.

Alexis bumps into Mimi who tells her that Fallon is still trying to buy the Swan House. Alexis offers to pay for her wedding if she moves the date. Mimi says no, tell Fallon to back off or she is out of society again. Alexis gets in her car and runs over Mimi, then puts on her lipstick and gets out of the car and shouts for someone to call an ambulance.

Sam goes to so Manny, they almost kiss, but Sam stops it. He tells Manny that he can’t do this to Steven and he has to let him go.

Culhane and Keith deliver Ava’s antiques. She starts to laugh at their problems with border patrol and Keith pulls a gun on her. Culhane tries to go for the gun to save Ava

Sam is looking at the wedding album when Alexis walks in, he notices a photo of Claudia. Sam says she is crazy and she was supposed to be locked up in a mental institution. Alexis does the math in her head and remembers that the baby had a note attached, it was from Claudia.

Blake bought a soccer team for Cristal and tells her they are going to run it together, it will be the family team.

Fallon tells Alexis she heard about the accident and coincidentally the Swan House is now available. Fallon asks her how dark is her soul, Alexis says any mother would have done the same thing. Fallon re-extends the invitation. Fallon says that she is getting married in the mansion, Alexis says she is banned from society for running over Mimi.

Ava enjoys a glass of tequila with Culhane, then she hits on him. Ava gives Culhane the blackmail on Fallon and Blake, she offers him to stay and keep doing what he is so good at.

Same spoke to the mental institution where Claudia was kept, she escaped before his wedding. Anders comes in and tells Sam that the baby is gone.