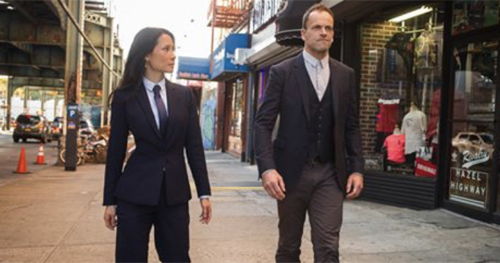 Tonight the CBS series Elementary airs with an all-new Sunday, April 30, 2018, season 6 episode 1 and we have your Elementary recap below. On tonight’s episode called, “An Infinite Capacity for Taking Pains” as per the CBA synopsis, “The Season 6 premiere: As Holmes confronts a medical diagnosis that threatens both his career and sobriety, he meets Michael, a man who credits Sherlock for helping him conquer his own addiction. Also, Holmes and Watson are hired by a reformed party girl heiress to find her missing partner in a years-old sex tape that has just leaked online.”

Holmes is lying on an autopsy table waiting for a call from his doctor. The phone rings. He heads to get his results.

A man watches a sex tape and then makes a comment. He goes to bed. Later, he heads down for more water. His dark house is wrapped in plastic. Someone strikes him. Blood prays. He drops to the ground.

Watson is at the precinct. She asks Hill if he has seen Holmes. He hasn’t. Watson is there to meet with a woman by the name of Sophie Bishop who is in a sex tape. She hasn’t been able to find the old boyfriend Sammy who is in the tape with her. He has been missing for the last day. Together, they were going to bring legal action against those who posted the tape that has been in circulation for the last 5 years. She is upset because he is missing and also because she will lose her trust fund if she doesn’t shut down the video.

Holmes goes home to tell Watson that his strange behavior is due to PCS, Post Concussion Syndrome. He doesn’t know if he will get better. Watson hugs him. He is uncomfortable, telling her his personality didn’t change. They get a call.

Watson and Homes head to Sammy’s home. Holmes smells plastic, but there is none. They look around. There was plastic there prior judging by adhesive marks. They spot a bit of blood. Outside Homes gets a call from a computerized voice. They offer him $1 million to drop the case. He demands $5 million. They wire the money within seconds.

Holmes meets with Sophie’s brother. Homes accuses him of being behind his sister’s trouble. He denies it. Holmes has more questions but when the noises around him get too loud he walks away.

Holmes heads to a meeting to talk about his sobriety. He meets a man outside who tells him he attended him a meeting with him four years ago. What Holmes said it that meeting changed his life. Homes mentions he doesn’t have a sponsor. The man offers to talk anytime.

Holmes tells Watson about his visit with Sophie’s brother. They both come to the conclusion that he isn’t behind anything. Hill calls Watson. Sophie has been found dead.

Gregson and Holmes call Sophie’s husband in. They accuse him of leaking the sex tape to get the $60 million buyouts Sophie’s family gave her. They also think he killed Sammy and Sophie. He denies it all, except for the sex tape. He did leak that.

At home, Holmes gets angry that he has walked into a room and doesn’t remember why. He gets upset and pushes a bunch of paperwork to the floor. He vents to Watson. If he cannot continue to work he might fall off the wagon.

At the station, Homes is looking over crime scene photos when Hill comes in. There is a woman up front who thinks she might be the next target of whoever killed Sophie and Sammy. She made a sex tape with Sammy too. Sammy had an ex who was very jealous and threatened to kill Sophie. She hands her phone to Holmes who watches the beginning of the tape and notices something.

He is watching the sex tape at home when Watson arrives. They head to the station and call Sophie’s husband down with his lawyer. Holmes discovered that Sammy had a camera system installed for recording his sex tapes. Ryan was recorded killing Sammy. He cannot deny it.

Holmes calls the man from the meeting. He asks him if he wants to meet up. The man tells him yes as he digs a grave for a woman, telling Holmes he is out of breath due to walking.