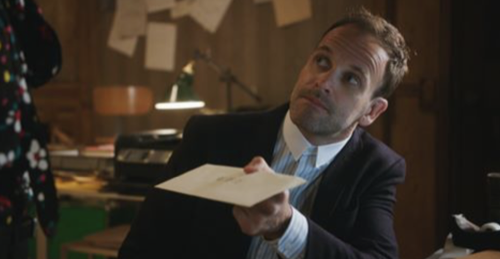 Tonight the CBS series Elementary airs with an all-new Monday, May 14, 2018, season 6 episode 3 and we have your Elementary recap below. On tonight’s episode called, “Pushing Buttons” as per the CBS synopsis, “Holmes and Watson enter the world of rare antiquities when they investigate a case in which the victim was killed during a Revolutionary War reenactment. Also, as Holmes grows frustrated with the length of his cognitive recovery, he finds solace in his growing friendship with Michael.”

A group of men are reenacting the British defeat. After a scene, they lay in the field pretending to be dead. They realize seconds later that their friend George is really dead when blood begins to pool on his white shirt.

Gregson and Holmes arrive on the scene and get witness accounts. The men say they saw a white van. But none of them can really get their stories straight. The police begin checking rifles. Watson and Bell talk to George’s bodyguard who was waiting in the car. George owns a franchise of gyms that many bought into but couldn’t get out of the red. He received a lot of death threats.

Holmes is at the doctors. He isn’t doing any better. His headaches are getting worse. His doctor tells him to take this new medication and it should be okay given his history of addiction.

Holmes combs through George’s emails. There are a lot of threats and emails from his daughter. The two have a fiery relationship. In her last email, she threatens to kill him.

Holmes meets with his new friend Michael. He tells Michael about the new meds his doctor prescribed.

Marcus and Watson meet with George’s daughter. They mention that they know she is estranged from him and she stands to inherit $5 million. She tells them she has changed. She lives here in the commune. Watson suggests that maybe she had someone kill her father for her. She tells them there is no technology allowed on the grounds and if she does inherit the money she plans to give it away. They finish their interview and get a call from Gregson. He is at George’s house. It has been burned down.

Gregson meets with Marcus and Watson. The fire was arson. A footprint was found with dirt matching the same dirt from the reenactment. Watson tells them she has been reading up on George. He collected very valuable artifacts from the Revolutionary War. His home must have been looted too.

Holmes arrives. He overslept because of his meds. He and Watson head to meet a specialist in artifacts at the NYPD. He will help them if they help him with a case. Holmes looks at the pictures of his case and solves it in 2 minutes.

They catch a lead with a possible suspect. They meet with the Fire Chief. He took things out of George’s house. He explains that he did take the stuff but he didn’t start the fire. They are back to square one.

Holmes cannot sleep. Watson wakes. The house smells. He is running a few experiments and has come to the conclusion that the arsonist was trying to burn through the safe, not the house. There are signatures of a very important person in there, the signature of Button Gwinnett who signed the Declaration of Independence.

After some research, they realize someone else that takes part in the reenactments who knows George also has a collection of Button’s. They bring him in. He is an art dealer who tells them he was going to buy George’s collection. He is innocent.

Holmes goes back to the doctor. His meds are making him tired. The doctor tells him he needs rest badly if he wants to get better. Holmes returns home to see Watson who thinks she knows who the killer is, another man, Chris, who is part of the reenactment. They think he killed George over a land dispute. He offered to buy a piece of land from George that originally belonged to his ancestors. George told him no.

Watson and Holmes think that Chris hid the gun in the portable toilets. They need to call the toilet company and track them down. Holmes breaks the news to Watson that he needs to take time off.

The next day, they call Chris in. They tested the kitty litter at his home that absorbed the cocktail mixture he made to commit the arson. They will also find the gun but if he talks now the prosecution might be a little nicer to him. He confesses.

Holmes meets with Michael again. Michael tells Holmes that a girl that attends their meetings like clockwork has gone missing. He wants Holmes to look for her.