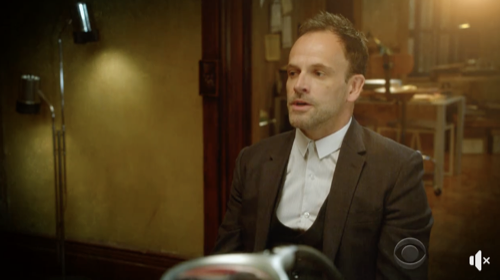 Tonight the CBS series Elementary airs with an all-new Monday, June 4, 2018, season 6 episode 65 and we have your Elementary recap below. On tonight’s episode called, “Give Me the Finger” as per the CBS synopsis, “Holmes and Watson enter the world of nuclear security when they investigate the murder of an ex-Yakuza gang member. Also, Captain Gregson is blindsided by a stunning personal confession from his daughter, Hannah, a police sergeant.”

Hannah comes to see Gregson. He is headed out to dinner soon. They go to talk in his office. Meanwhile, the fire department breaks down a door to a fire to find a man dead on the floor. It is obvious he was murdered. Marcus, Watson, and Holmes arrive to investigate.

The man’s name is Ando. He is a 35-year-old freelance IT consultant who is missing a pinky. Holmes thinks he could be a yakuza – a Japanese transnational organized crime syndicate. Holmes finds a prosthetic pinky. He thinks he is no longer part of the syndicate.

They locate the maker of the prosthetic. She tells them that she made the pinky finger for Ando with a thumb drive in it. He paid her from the dark web. He was forced into the yakuza. He was talented at espionage.

Gregson calls Watson in. He needs to talk to her. His daughter Hannah told him she is an alcoholic. He missed all of the signs. Since Watson is a sober coach he wants to talk.

Watson arrives home to see Mason and Holmes working the case and working on each other’s nerves. Mason finds payments Ando made to someone local, a former yakuza associate. They head to meet the man who runs a dojo. He did not kill Ando but gives them a lead. They head to a warehouse. Upon entering, they come face to face with law enforcement.

They are cuffed and put in the back of a truck. Gregson comes to see them. The three of them meet with a military general and a colonel. Holmes accuses them of killing Ando. They are insulted. Ando was working for them to upgrade the missile control network. They are scared that their project and national security could be compromised.

At home, Watson tells Holmes the fire at Ando’s appears to be an accident by the killer. Watson has been doing her homework online and has found a blogger who is against the security upgrade. He is so passionate, he may be a suspect. Watson tells Holmes in confidence about Gregson and Hannah.

Gregson, Holmes, and Watson meet with a general. They need an alibi. He shows them embarrassing pics of him roleplaying as a baby with his nurse. He mentions that maybe they should talk to a man named Eddy.

Hannah’s roommate comes home and tells her someone hit her car outside. She heads out. It is Michael, the man from Holmes’ meetings.

Marcus meets with Holmes at a boat yard. They went to meet Eddy at his home but it looks like he ran off with whatever he could grab. After taking a look around, Holmes discovers he has a boat and may be trying to sail away.

At the boatyard, they discover Eddy. He has been zip tied and left in his boat. Holmes reports back to Gregson. He also tells him he knows about Hannah’s admission. He tells Gregson not to blame himself and to focus on her recovery. Their talk seems to soften Gregson.

At home, Watson and Holmes get to talking about Ando’s cooking in his apartment prior to his murder. They have an idea. They head to the precinct where they question several military leaders who have all been suspect. They have discovered that the killer was after Ando for 2 floppy disks he had access to that has the recipe for how to print US money. During the meeting, Holmes insists he has to eat because of his condition. It is a stinky meal that makes everyone sick but a female colonel. She becomes their suspect. She burned down Ando’s apartment because of her lack of smell. But she refuses to confess and lets herself out.

The colonel meets with the man from the dojo. She tells him she killed Ando and just when he asks her how after giving her a passport and $5 million Marcus comes rushing in with the others. They have their killer.

Hannah comes home to find her roommate strangled on the couch. She screams. Michael is outside.