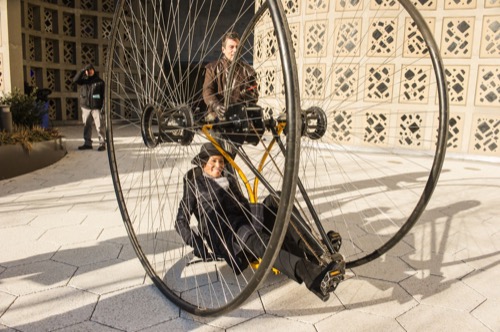 Watson meets with her sister’s friend. He has come to her about a woman named Maria that he has been chatting with every day. He has never met her. But her 4-day silence and the fact that she was upset about something makes him worried. Watson asks him if he knows what catfishing is. He tells her Maria is not like that. He offered her money to help her with the jam she was in and she did not accept it.

Watson updates Sherlock on the case while he plays with a trebuchet he is building. It is to help him solve a case.

A Deputy Marshall by the name of Strider comes to see Bell. He thinks he would make a great candidate and he wants him to apply. He tells him he will think about it. Bell gets a call from Watson. She thinks Maria has been kidnapped after visiting her apartment. Bell arrives. Nothing looks to be stolen. She has a lot of gift cards. There is evidence of blood and footprints that show she walked out on her own. There are also male footprints. They call her sister and her sister’s husband in. They have no idea. They were not contacted by anyone. They only see her a couple times of the year. They go out to eat and she always pays with gift cards.

Bell tells his girlfriend about the recruiter. She isn’t opposed to moving with him. But she wonders who put his name in for recruitment.

Sherlock and Watson visit the site owner of the Black Pill. They need to find the man who threatened Maria or they will report him to Homeland Security. The man reluctantly gives them the name of the man, Kyle. Homeland Security arrives. Sherlock tells him he lied too. The man is going away for a long time.

Bell arrives to see Gregson. They found Kyle. He had a bunch of guns in his car, headed to a female gym. They question him. He tells them he loved Maria. They bring him into the station. He tells them he was in Ohio when she went missing. He came here to tell her he loved her after they got into a fight. Maria was on a road trip and he knew she was headed back to New York. They need to dig into that.

Bell gets Sherlock alone. He figured out Sherlock is the one who recommended him to the Marshalls. Sherlock explains that things will change at the precinct and Bell is a great detective who deserves more.

Watson and Sherlock head to a convention where they found out Maria sell her toys. They talk to an organizer who tells him about a man named Roman who constantly harassed Maria. Bell calls a bit later. He went to Roman’s house and it looks like he is a victim too. He has discovered that Maria and Roman were in a relationship. They found his phone and it seems he got them into some bad business. Sherlock notices that Roman’s property runs further back than they thought. They find a workshop. Equipment is missing. But there are shavings. They were making something. They go through the place and realize they were making ghost guns, completely untraceable.

They head to see Gregson who tells them the ATF has been trying to track down the dealers and makers of guns just like the ones they are talking about. They get to digging through files. Sherlock and Bell talk. Bell cannot leave. His family is here and Gregson made him the man he is.

Sherlock finds a potential lead. Bell visits with the prisoner who won’t talk. Bell threatens him. He knows he has a mistress who has money from one of his bank robberies. The man talks. He gives them the name of the gun dealer. They head out. At the man’s house, everything goes to hell. The dealer gets himself killed by police who are forced to shoot him. Their lead is gone now that the man is dead.

Sherlock notices the dead man is part of a gang. They find newer guns in his shed. They suspect Maria and Roman are making guns and teaching others.

They called Maria’s brother in. They want to see his tats. They know he is part of the gang. He confesses. They get Maria and Roman to safety. At the hospital. Gregson confronts Bell. The Marshall’s paid him a visit. He wants Bell to take the opportunity. He would be so proud.

Bell visits Sherlock to give him his 6-month notice. He put his application in.