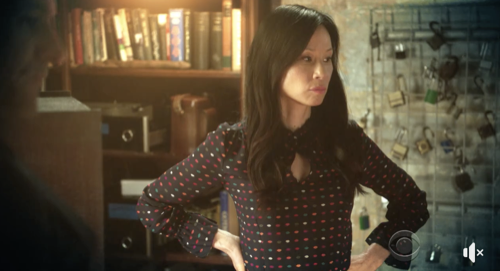 Tonight the CBS series Elementary airs with an all-new Monday, July 30, 2018, season 6 episode 13 and we have your Elementary recap below. On tonight’s episode called, “Breathe” as per the CBS synopsis, “Holmes and Watson investigate the poisoning of a relocation expert and discover the man led a decades-long secret career as a contract killer before his death. Also, Watson’s path to adopting a child suffers a setback as she prepares for a home visit from her agency case worker.”

Sherlock brings his murder crime scene dollhouse upstairs. He has cleaned it up to look PG for the visit Watson will be having with the adoption agency. He promises to also get the bear trap out of the living room. Marcus calls. They head to a crime scene.

They arrive at the office of a dead businessman who is dead at his desk. They are not sure what the man who goes by the name of Mr. Frisk really does in the area of relocation. They note a wine bottle that Sherlock says shouldn’t smell like almonds. Maybe he was poisoned? Sherlock picks a lock to a room off of the office. They all peer in. Could he be a prolific contract killer?

Watson and Sherlock show Gregson all of what they have found; files of high profile men who were mixed up in murder as well as weapons. They call in an agent familiar with the deaths of the people in Frisk’s files. She shares that the last two murders that came across her desk. Witnesses recall seeing a man who matches the appearance of Frisk.

Sherlock and Marcus go to visit an employee of Frisk’s who has worked for him for 15 years. She is shocked to learn he is dead. She laughs at him being called a hit man. He helped people relocate. He did have some clients he worked with personally. She names a few that Bell doesn’t have files for leading them to believe that they may been suspect.

They visit a man named Medina who has bodyguards stop them at the door. He denies knowing Frisk and says he has an alibi. He was in the company of a well known politician. They are pretty sure he is their man but how can they prove it. Sherlock recalls Frisk’s employee mentioning her boss did work for Medina in 2014. They need to figure out who Medina had Frisk kill. If they can solve that then they might find evidence against Medina.

Watson meets with her lawyer who has given her the wrong dates twice for important meetings with adoption agencies. He brushes it off and tries to tell Watson she could have made the mistakes of missing the appointments. He thinks they need to start over. Watson is not happy when he tells her he will not call the agencies to admit his mix-up.

Watson comes home to find Sherlock reconstructing what Frisk was working on and where he went in 2014. Sherlock discovered in that same year Medina was working on a drug for bacterial infections. A drug he raised the price on. Maybe someone complained and he needed them killed? Sherlock asks her about the visit with her lawyer. She tells him all about it. She knows his first thought is to go nuclear on her lawyer, but she doesn’t want him to do that. She also doesn’t want him to feel like he needs to co-parent.

Sherlock and Marcus approach Medina who is out to dinner. They have discovered a researcher who was killed just before he was going to reveal information that would deem Medina’s new pharmaceuticals unnecessary. Medina gets angry and tells them he is going to have his lawyer destroy them. Sherlock notices that Medina has his wine classes changed out by the servers. He admits yes, he likes to drink certain wines out of appropriate glasses.

Back at the station, Sherlock tells Gregson and the others that in frisk’s office there was a dessert wine with the poison in it poured in the wrong glasses. Medina wouldn’t have done that. He was framed.

They discover video footage of Frisk and after watching it – it seems he may have killed himself in an attempt to frame Medina.

Marcus and Sherlock head back to see Frisk’s employee. She was seen in a liquor store leaving after Medina. She bought the same wine. They want to know why she lied about knowing who Frisk was and why he wanted to frame Medina. Sherlock sees her son in his room doing salt water treatments. Sherlock confronts the woman. Frisk wanted to frame Medina because the boy is his son and he has cystic fibrosis. Frisk wanted Medina gone so the drug to help his son would be lowered.

Sherlock looks through Frisk’s files on the death of the researcher Romano. Sure, Frisk was a hit man but he tried to do something of honor before he killed himself so he wants to help solve the crime, Sherlock tells Watson. The doorbell rings. Sherlock has invited the King of Bohemia. He has a son who has adopted 18 men and women in exchange for money, bestowing them with his famous lineage and the ability to enter into some rich circles. Watson’s lawyer was the one who worked out all of those adoptions. The King isn’t sure what to do. Sherlock thinks Watson would know best.

Sherlock tells Bell and the agent familiar with the recent murders that he wants to follow through with Frisk’s work, putting a hit on Medina. Gregson and Bell call Medina down to the station. They apologize for accusing him and for almost getting him killed. They get a chuckle when they tell him they put out word that he was ready to give up the man who killed Romano for him. Angry, the hitman who helped him began following Medina and they picked him up. He confessed to 5 other murders. Medina is taken into custody by the feds.

Watson meets with Gary and tells him all she knows about his adoption business with the son of the King of Bohemia. He is ready to help Watson.

Back at home, Sherlock tells Watson about Medina. Watson tells him how her adoption is back on track. The kitchen smells great. The king sent over a feast as a thank-you. Sherlock tells Watson that he has never felt pressure by her and that he wants to be involved with her child. He would lay his life down for her and for the child. He would like to be called Uncle Detective.