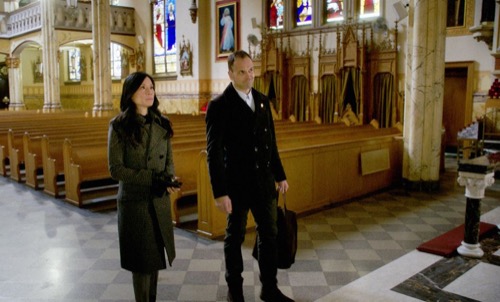 Tonight the CBS series Elementary airs with an all-new Monday, August 20, 2018, season 6 episode 17 and we have your Elementary recap below. On tonight’s episode called, “The Worms Crawl In, The Worms Crawl Out” as per the CBS synopsis, “Holmes and Watson investigate multiple motives for murder when a zoologist is killed because of his numerous love affairs or his trailblazing research. Also, Holmes finds himself the victim of identity theft after his medical records are stolen.”

Sherlock is running some type of strange experiment. He is strapped to a chair with heaters going. Two women are helping him as they are painted the same colors as the wall pattern. His doctor calls him in. He arrives at the doctor’s office. He is nervous. The doc tells him he is fine, but they were robbed and someone stole his personal information. He offers his help.

A woman in a lab coat shows a group of people in a lab how worms create the best fertilizer with their poop. She has one of them hold a bucket as they churn out the fertilizer. Body parts start coming out.

Marcus brings Joan in. It is a well-known professor by the name of Will Velnik who specializes in worms. He is called the worm hunter. He was popular among the ladies and the students, traveled a lot, and was supposed to be in the rainforest. He was stabbed in the neck and his cell phone and hard drive is missing.

The team looks over video footage in the weeks prior. The footage has been tampered with. They bring in the man who is responsible for security. Sherlock notes that he has been using fertilizer. He can tell by his hands. Maybe he killed him? The man is angry. He got the fertilizer from the professor as payment. The professor met with ladies in his lab and the man adjusted the security footage. He has text messages to prove it.

Sherlock has narrowed down a person of interest, a TA who the professor named an inchworm after. They need to go through all of the species of worms he recently discovered and look at their Latin names to see if he named them after any other woman of interest.

They bring in a woman. She admits they had sex but it wasn’t an emotional relationship. She was with another lover the night the professor died. She mentions a woman named Becca who was rude to her, a jealous student. They call in Becca. She is married she tells them. They have footage of her car in the lot the time the professor was killed. It must have been her husband. They call Donny in. He admits to killing the professor. He shot him 3 times, he tells them. That doesn’t make sense. Professor Velnik was stabbed. Sherlock thinks maybe he did shoot him but someone else killed him.

Sherlock comes home to see Joan. The coroner has changed his findings. Velnick was stabbed and shot by the bullets were stopped by some kind of armor. They don’t see him wearing a vest of any sort in the video footage. They look at the tapes again. Maybe the silver hoodie he is seen wearing is a ballistic textile. Joan could see that happening. Velnik was doing research for a company that makes the same type of textile.

Sherlock goes to visit a business where he tracks down the man using his identity. He is from Ireland and came here post-Brexit to secure a better life. Sherlock tells him he needs to get a new identity. He won’t turn him in but would hate to see the man killed because he is using his name. The man tells Sherlock he got his name off the darknet.

Marcus and Joan meet with the head of the company who hired Will to hunt for bug fibers. He didn’t kill him. He was away at a meeting. The silver hoodie Will was wearing was not their prototype. Will did tell him he was getting anonymous threats. Maybe he made the armor because he knew someone was going to kill him.

Sherlock has Mason find out who is sending the death threats. It is a woman named Quinn, who knows Velnick was working on the bulletproof hoodie for her competition. They bring her in. She admits she sent the threats but they were only viruses. They weren’t real threats. She wanted to steal data to see how far along Will was with the ballistic textiles.

Marcus tells Gregson they think Velnik was killed by the person who made the prototype. Sherlock texts. He wants Marcus to bring the gun used to try to kill Velnik to the firing range. At the range, they test a bunch of textiles Sherlock secured from different companies. He offered them millions for funding. They test them all. They head to the lab who has a similar textile to the one Will was wearing. The lab tells them they haven’t even made enough material to make a tank top. They cannot figure out how to mass produce because the spiders are cannibals. Sherlock notices they have locks on their spider enclosures. They discover the lab assistant was letting a woman in so they could spend some romantic time. They discover that woman was Will’s lover, the woman they first met who tried to pin it on Becca. They go to visit her but she denies it. Sherlock knows she is lying. He killed her silkworms so she retaliated. He just has to find proof.

They call the man who hired Will back in. They are on to him. He helped kill Will’s lover’s silkworms by killing the trees she planted on her farm with Will’s special worms so she wouldn’t get a contract he was after. The man tells them it was Will’s idea and he offered to sabotage her for money. They offer him an out if he can get something on Will’s lover.

Sherlock finds the man who sold his identity on the web. The man begs for mercy. He didn’t want to do it but a man made him.

Marcus and Gregson call in Will’s lover. They searched her home and found Will’s hard drive. She tells them she wasn’t going to kill him. She didn’t go in there to kill him, but when she discovered he killed her trees as he lay on the floor after being shot she stabbed him in a rage.

Sherlock tells Joan about the man and how he thinks it is Michael. He tells her that he is going to be back now that Sherlock is better.