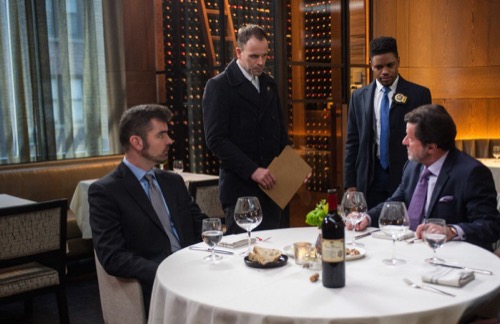 Tonight the CBS series Elementary airs with an all-new Monday, August 6, 2018, season 6 episode 14 and we have your Elementary recap below. On tonight’s episode called, “Through the Fog” as per the CBS synopsis, “Holmes and Watson race to help Detective Bell when he becomes a victim of a bio-terrorism attack at the precinct and the station is quarantined. During the lockdown, Captain Gregson and Detective Bell begin to suspect they are trapped inside with the perpetrator. Also, Watson faces the difficult task of helping her mother, Mary, accept that her advancing Alzheimer’s disease requires her to receive more medical care.”

Watson is filing Sherlock’s tortoises’ toenails. Watson’s dad calls. Her mother who has Alzheimer’s took the car and hasn’t come back.

Gregson and Marcus call in a suspect named Jeff after a married woman Alexis turns up dead in the river. The two were having an affair. Jeff was obsessed with her and threatened to kill her when she refused to leave her husband. They already have the proof that she was shot in his apartment.

Marcus goes to get a coffee when he sees a backpack on the chair. It starts to smoke. He grabs it and runs. He throws it into an interrogation room. From the other room, he yells to a cop to tell the captain they need to quarantine the building.

The captain calls for back up. He talks to Marcus through the door. Marcus doesn’t want to come out. He was sprayed in the face. He doesn’t want to expose anyone. He thinks the person who did this is still in the building.

Watson’s mother shows up to have lunch with her at a restaurant that has been closed for years. Sherlock calls the station and is told the news. They suspect the cartel after Gregson recalls a similar event at a Mexico police station. Sherlock wants to go talk to them. Gregson tells him no. He doesn’t listen. Sherlock and Watson head out.

The CBC shows up. Gregson tells the head agent that he thinks the perp is still in the building.

Sherlock and Watson go to a club where they know the leader of the cartel is. Meanwhile, the man who was sitting close to Marcus begins to have a seizure.

Sherlock offers the head of the drug cartel secrets about his enemy in exchange for information about the Mexico attack and whether anthrax was used. The cartel doesn’t have any information.

Gregson and Marcus begin to question everyone inside the precinct. Sherlock and Watson used photos sent to them by the captain that was taken by the perp to determine what date and time the precinct was scouted out for the attack. They narrow it down to July 2, the day of a union meeting. It looks like one of their own is behind the attack.

Watson and Sherlock narrow down the pool of cops to a suspect, an officer named O’Grady who has a temper and a large personal file. Gregson and Marcus get to question him. Watson and Sherlock call in when they cannot access the NYPD system. Gregson discovers the servers were taken. The whole attack might be a set-up for a heist to grab the servers worth millions on the street.

Watson and Sherlock show up. They call O’Grady in and the two men who showed symptoms. All three of them were in it together. They needed the money after going bankrupt.

Watson talks to her mother who admits she needs a nurse. The two cry together.