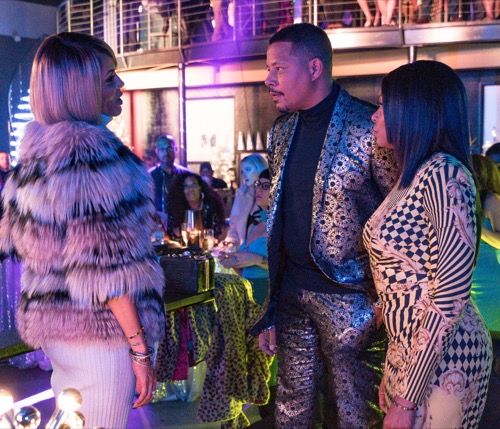 Tonight on FOX their blockbuster drama Empire airs with an all-new Wednesday, December 5, 2018, episode and we have your Empire recap below. On tonight’s Empire season 5 episode 9 Fall Finale called, “Had It From My Father,” as per the FOX synopsis, “The financial security of the Lyon family is on the line as their LFM showcase quickly approaches.

Kai’s research for an expose on Empire uncovers some dirty activity within the company and causes conflict with Jamal. Meanwhile, Hakeem and Tiana finally reach an agreement on how best to move forward with their relationship, Andre struggles with his decision to let a new love interest in and Kingsley strikes a deal with Giselle.”

Bella is holding a gun. Hakeem sings to her as they all watch in horror. He manages to get it away from her. They all sit down and talk, Lucious and Hakeem in one room and Bella, Tatiana and Cookie in another. Lucious tells Hakeem he shouldn’t be carrying, there is no need. Meanwhile, Cookie tells Tatiana to do her and what makes her happy.

Kai is working on a story about Jeff selling customers data. Jamal isn’t happy he is a part of it. In bed, Cookie and Lucious talk about how they have things they need to fix. Cookie thinks they all need to secure their futures and then the entire family will be better.

The next day, Gisele is threatening Jeff. She wants to run Empire or she is going to the news outlets. Jeff offers her co-CEO. She accepts.

Teri and Andre bring Quincy home. She tells Andre he is a blessing to them for all he has done. Meanwhile, the Lyons all watch Kai on the news as he breaks the news about Empire’s illegal habits. Across the city, Jeff, Becky, and Jeff are all watching the news. Jeff throws his drink while at home, the Lyons are all laughing. Back at Empire, Jeff and Giselle try to do damage control.

Cookie and Lucious are at rehearsals for the showcase. It isn’t going well. No-one can find the beat, Hakeem is a no-show and Jamal wants to perform his own song for Kai.

Tatiana tells Hakeem she doesn’t think they should be together anymore. Andre returns home. He has doubts he deserves Teri and Quincy. Lucious tells him to embrace them and enjoy the good in his life.

Hakeem goes to see Blake and tells him about Bella. He needs to change, he tells Blake. Andre arrives at the beach to see Quincy and Teri.

Andre tells Teri he is a dangerous man. She accepts the risk. They kiss. Meanwhile, Jeff and his security arrive. He tells Becky he knows she has been working with the Lyons. Security takes her away. Thirsty goes to tell Lucious about Becky. He is upset.

Kai comes to see Jamal. After he ran his story, someone came to him and told him all about Lucious’ past and the dossier he had on all his artists. He buried it all, including criminal wrongdoings and more. Kai feels he needs to run it. Jamal tells him he cant. It’s his family. Kai is all about truth. He tells Jamal he needs a break.

Cookie is stressed and leading the showcase alone after Lucious disappears. Blake, Hakeem and Tatiana team up to sing Hakeem’s song.

Lucious shows up at Empire. He attacks Jeff. Gisele intervenes and screams at Lucious – “that is your son!”

Lucious goes to visit Jeff’s mom Tracy in the hospital and has a flashback of when he was with her in his younger years. She wakes. She knew he would come back.

Lucious shows up at the showcase and tells Cookie they need to talk. She walks away. They have a lot going on. The artists all take the stage and sing. Cookie tells Lucious they have sponsorship offers worth millions. She is thrilled. Gisele shows up and tells Lucious she can get Jeff out of Empire if he wants to be her partner. He tells her they will think about it.

Backstage, Cookie gives Lucious a check. She sold the condo and she is all in with him. He tells her they need to talk but they are interrupted again. Cookie takes the stage to thank the crowd. The family joins her. She talks about all of the Lyons and is interrupted by Jeff on a microphone. He tells the crowd how he is Lucious’ son and then tells them all about how he got his mom hooked on crack. Lucious is ashamed. Andre walks up to Jeff and tells him how he is going to end him.