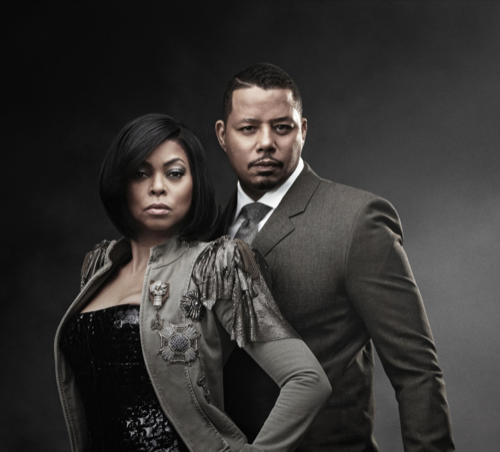 Tonight on FOX their blockbuster drama Empire airs with an all-new Wednesday, September 26, 2018, episode and we have your Empire recap below. On tonight’s Empire season 5 episode 1 premiere called,  “Steal From the Thief” as per the FOX synopsis, “The Season 5 premiere: Cookie and Lucious are still in the midst of picking up the pieces two years after losing Empire to Eddie Barker. The family is now completely dispersed and coping in their own ways after experiencing unimaginable tragedies. Meanwhile, in an effort to reclaim the Lyons’ position in the music industry, Cookie sets her eyes on a talented new singer and rapper.”

Lucious puts his hands on a casket.

Lucious is sitting on the couch. He watches a music video of Tiana and Hakeem. Cookie comes home. It’s hot in the house. She wants to fix the AC but Lucious reminds her they need more money. Cookie reminds him they need to hustle in order to get Empire back. Lucious thinks they can sell some music videos for money. Jamal calls in from Paris by video chat. He asks if they plan on celebrating their two-year anniversary. They ask him about his label. They get off the phone and realize they forgot about their anniversary. Movers come in and take more of their things. They have a plan to take down Eddy tomorrow night. Andre is going to help them. Meanwhile, Andre is playing chess in prison.

At Empire, Becky and the executives are happy that their profits are up. Becky is glad that Hakeem and Tiana’s work in getting the recognition. Becky misses them.

Hakeem works with a therapist on his breathing. Now that he is missing part of his lung, he needs to keep trying to do his breathing exercises, his therapist tells him. Tiana calls for a break. The nanny takes the babies to the park. Tiana tells Hakeem she needs to get back on the stage and Eddie is going to give her another chance now that she has had her baby.

Cookie and Lucious show up at an awards ceremony. They hit the red carpet and get questioned about Eddie and Empire. Cookie has a run in at the bar with Giselle who shares that she would have handled things differently than Eddie. Hakeem and Tiana perform their song on stage. Hakeem struggles for breath and is taken off the stage. Tiana finishes the song with another singer.

Eddie and Giselle are ushered to their seats right next to Lucious and Cookie. Cookie spills her wine all over Giselle. She leaves to the bathroom. They all sit. Lucious and Cookie ask Eddie all about him skimming off the Empire accounts. They won’t get him sent to jail. All he has to do is give them Empire back. He agrees.

Back at home, Eddie is drunk and shredding papers. Giselle wants to know what is going on. He tells her they lost. She has been running the show, she tells him. He gets angry at her for her comments but then changes his mind and starts acting nice. He tries to kiss her and she pushes him off hard. He trips and twists around, hitting his head off a chair. He falls and is bleeding from the head. Giselle realizes how bad it is and walks out of the room.

Eddie’s death destroyed their scheme to take back Empire, Lucious gets mad at Cookie for not making an effort two years ago to keep the business. Jamal comes in with his correspondent Kai to meet the parents. Lucious and Cookie tell Jamai the truth about the two years of misfortunes. Jamal tells them to take what they have learned and built something new.

After the award show setback, Hakeem goes home angry at Tiana for not coming to his aid, caring more about herself and winning the award. Hakeem is drinking and the argument is getting louder, Bella walks in and Hakeem then tells Tiana that he needs some space.

new. Lucious seems resistant and cynical about the possibility, saying that they can’t just start a label without any money. “Broke ain’t never stopped us before,” Cookie responds. “What we need is a new sound,” she adds as she invokes NWA, Whitney Houston, and Prince. “Old school with a new sound.” As Lucious says they need to find someone who stops them dead in their tracks, Cookie laughs and tells him she thinks she’s found that act.

Cookie goes back to visit Andre in prison and asks for his help to find the rapping girl in the car because she believes that she is the sister or girlfriend of one of his fellow inmates. Andre wonders if Cookie is trying to get herself killed. Just then, the woman in the car walks through the area with an inmate in a wheelchair. The woman is a social worker and her name is Treasure, Cookie tells her that she is going to change her life.

Giselle is asked to become Empire’s interim CEO at Eddie’s funeral. She says yes and then stops the car she is in and dumps Eddie’s ashes in the sewer.

Cookie invites Treasure and her manager over to play for Lucious. The manager seems to be controlling and rude, he calls Treasure a ghetto kid with no training. Lucious asks the manager outside to talk business.

At Jamal’s apartment, Hakeem pulls a gun on Kai, wants to know why he is with Jamal. Jamal is upset, he tells Hakeem he is worried about him. Jamal tells Hakeem that he is dating Kai. Hakeem is hurt because Jamal only showed up two days after he was shot. The two hug it out and makeup.

Treasure tells Cookie and Lucious that everyone always doubted her. Cookie tells her to sing and forget that. The Lyons sign Treasure and create a new label. Jamal insists that he has his own label and wants to get back to his life in London. The four Lyons toast to a new beginning.

We rewind to six months earlier where this episode opened, Lucious touches the casket and he says, “I’m sorry.”