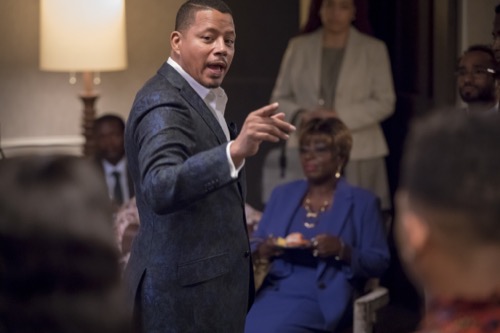 Tonight on FOX their blockbuster drama Empire airs with an all-new Wednesday, October 10, 2018, episode and we have your Empire recap below. On tonight’s Empire season 5 episode 3 called,  “Pride” as per the FOX synopsis, “Cookie and Lucious push to get back in the music game, but they’ll need the whole family and some old allies to make serious sacrifices in order to do so. Meanwhile, Andre finds a risky way to make a name for himself among his fellow inmates.”

Hakeem wakes from a nightmare. He starts to write some lyrics. Cookie yells to him to come downstairs. She is reading the headlines about the Lyons being broke. Jamal tells them to get it together. Lucious is bringing Andre home. They get a call. Andre isn’t coming home yet. He is in solitary.

Back at home, Lucious explains to them about Andre. In the meantime, he tells them they need to work on the company and he knows how to free them from Empire.

In the hole, Andre’s enemy comes to taunt him. He tells Andre he should have taken him out when he first got that. Andre has a flashback to when they first met in the yard and he tried to protect the young prisoner.

Jamal and Ty kiss while Jamal gets his tie on. Ty takes a call. He is going to Lagos with Bryson. Jamal is jealous and upset. Ty reassures him.
Cookie talks to her sisters. She needs them to work for her for free until they make it big. They all wants their own titles.

Becky brings Jeff Jamal and Hakeem’s contracts. The two come in for a meeting moments later. Jeff tells them they are free to go. They are all washed up, except Jamal. He owes him 6 new songs. Jamal tells him no. Jeff threatens that he will never sing again.

Lucious gets rejected by his long time investors who tell him he is a risk. Meanwhile, Cookie decides she is going to sell her safety net, a loft in SoHo.

Lucious pays a visit to Thirsty and asks for some help, maybe his client list. Hakeem comes to Jamal with some new dark material, all from the crazy dreams he has been having. Jamal is ready to lay down some songs with him. Hakeem is having trouble breathing. Andre recalls meeting the young prisoner who tells him he was framed.

Hakeem works on his songs. He gives them to Blake to sing. Ty and Jamal get into an argument because Ty dismissed Jamal’s problems at home.

Lucious pays Jeff an angry visit after he learns Jeff leased the building he was eyeing. Lucious threatens his life.

Cookie and Luscious decide to have a gathering at home. Becky shows up and all of their friends and business associates. Hakeem and Jamal perform. The night is a hit. Becky and Lucious talk. He wants to know when she is coming back to work for him. She tells him no. She is doing well for herself. He gets angry so she leaves.

Cookie tells her sister not to sell her loft after Lucious goes on a cocky rant about how he is going to build a new Empire.

Jamal gives Jeff his song with Hakeem. He tells Jeff that he will have to cut a lot of check if he wants the music and it is going straight to the Lyons new label. Jeff calls the correctional faciliKai where Andre is.

Andre tries to comfort the young prisoner Quincy who is visiting with his mother. She rejects Andre’s act of kindness. Lucious shows up to see Andre in jail.

Andre tells him the inside is making him hard but street smart. He will be a better man when he gets out. Andre has the bully killed with help from his men inside while he is in solitary.
Jamal videos Kai who took a group of kids he is with and had them remember his song and a dance. It makes Jamal smile.

Blake meets Tiana at the park. He is babysitting for her. She asks him about the song he is rapping. He tells her it is nothing. She wishes Hakeem could work on his emotions too. She invites Blake over for dinner.

Andre gets a visit from Quincy’s mom, Terry. She asks him if he took care of Quincy’s bully. He doesn’t admit or deny doing it. She thanks him and tells him he is a good man.
Jeff visits Diana in jail, telling her the enemy of his enemy is his friend.