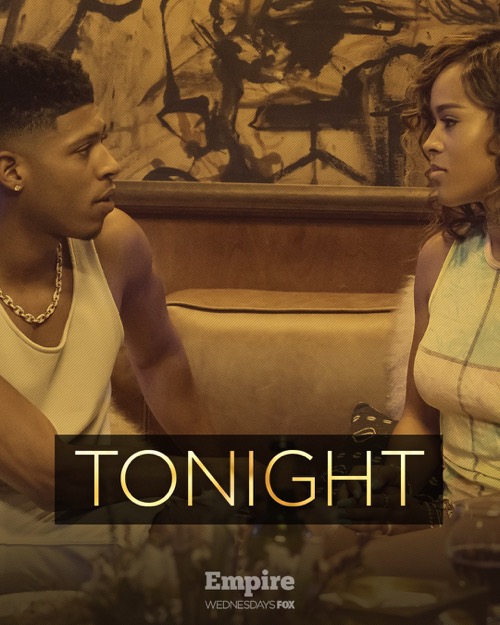 Tonight on FOX their blockbuster drama Empire airs with an all-new Wednesday, October 17, 2018, episode and we have your Empire recap below. On tonight’s Empire season 5 episode 4 called,  “Love All, Trust a Few” as per the FOX synopsis, “he Lyon family works to get back in their groove with a brand-new project underway. As Cookie and Portia attempt to sign Devon, who has just the sound they’re looking for, Andre tries to prove himself useful to Lucious on the business side of things.

Not having heard from Kai, Jamal panics and looks back at their history together. At Empire, the new management entangles itself with a dangerous tie from the Lyon family’s past..”

Cookie and Luscious pick Andre up at jail. He is finally out. Meanwhile, Jeff is meeting Diana to get more information on the Lyons. Diana laughs at Jeff’s comments that the Lyons talents are all garbage. She knows all about how Lucious embarrassed him, bruised his ego. She knows he wants something from her and she is willing to get it for some serious face cream made of stem cells and fetal tissue.

Cookie watches a music video with Porsha. She wants the background singer. She tells Porsha to find him. Jamal and Becky talk. He hasn’t talked to his boyfriend because he hasn’t checked in to his hotel yet. But he is sure everything is fine.

Jamal remembers back to how he met Kai. Some paparazzi drugged him at a bar. He took one sip but Kai stepped in to tell him what he saw. He got him out of there before anything bad could happen.

Andre has been reading one of Luscious’ books and he knows all of his past stories. He wants to help him now with his current problems. He has learned a thing or two. Luscious tells him to stay home.

Jeff welcomes Giselle back after she admits he won. Meanwhile, Cookie and Porsha look for a singer named Devon at the junkyard. He sings for her. Cookie tells him she is going to make him a star. Becky walks up. She has already approached him. Cookie is angry. She tells Devon to watch out.

Lucious meets with Sonny at the gym. Andre shows up. Lucious tries to collect some money he is owed, but Sonny doesn’t have it yet. They leave. Andre is angry that Lucious let him off so easy.

Devon meets with Becky and Jeff who give him the full court press. He seems hesitant, but Giselle steps in and woos him. He agrees to listen to more.

Jamal and Hakeem are working on some music. Something Hakeem says reminds him of Kai. He remembers how he thought Kai sold him out after but he was actually mad they made headlines together. He is a serious journalist who didn’t want to be seen with a drugged up pop star.

An associate of Kai’s pays Jamal a visit. They haven’t hear from him in 48 hours and they are worried.

Cookie meets with Devon at her house. She talks to him about his talents and where they come from. Who he is and where he wants to go. He tells her he needs to talk to his sister before he signs.

Giselle is having Jeff followed. She finds out he has been visiting someone upstate. Meanwhile, Diana gets her face cream.

Lucious and Andre arrive at another associates business. They ask for their money owed. The man laughs at him. Andre shoots him in the leg. Lucious hits the safe. There is hardly anything in there. They grab it and promise to be back for the rest.

Back at home, Lucious lectures Andre on his attitude. He wants to teach him how to control it.

Jamal is sitting in the dark watching a video Kai made him with a group of kids. He flashes back to a conversation they had about music. They hold hands and kiss.

Blake and Tiana sing his song in the studio. She is ready to record the track and share it with the world, but Blake doesn’t want to since it is Hakeem’s song. Tiana isn’t aware.

Cookie visits Devon’s home. His sister answers the door. She is using a walker and reveals she needs surgery. Devon has been taking care of her. Cookie changes her mind and leaves with the contract. She goes to Becky and makes her promise Empire will take care of Devon.

Hakeem sets up a dinner for Tiana to make her feel special for all her hard work. Meanwhile, Devon shows up at Cookie and Lucious’. He turned Empire down because they feel like home.

Jamal remembers back to when Kai showed up at 6 in the morning to tell him he was HIV positive. He didn’t think Jamal would want to be with him, but Jamal tells him that isn’t true.

Jamal is upset and searching for something. Becky tries to help him. He finds it – a ring he was going to propose with. It was going to be perfect. He cries. Becky comforts him. She calls the Lyons. They all get together. Jamal wants to go find Kai but they tell him he can’t. They will help find him. Jamal knows they know something. Lucious tells him they found Kai’s cell phone and wallet on the side of the road. Jamal breaks down.