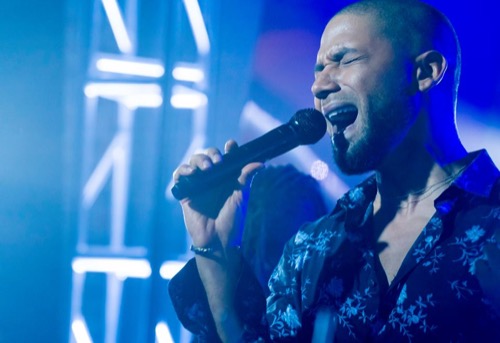 Tonight on FOX their blockbuster drama Empire airs with an all-new Wednesday, November 07, 2018, episode and we have your Empire recap below. On tonight’s Empire season 5 episode 6 called,  “In an effort to sign more artists, Cookie and Lucious make a bet to see who can find someone first. Lucious bets on the chance to meet an up-and-coming rapper in a high-stakes poker game, while Cookie takes to the streets to find untapped talent in a set of auditions.

Meanwhile, Hakeem refuses to leave the studio when his rage inspires what he considers his best music yet and Jamal finds himself at a crossroads when Becky claims he’s spending too much time with Kai.”

Lucious is watching Hakeem in the studio. They have been working for hours. Cookie wants them to take a break and clean-up.

Cookie is reading through some research about HIV at breakfast. She is concerned for Kai. Lucious tells her to relax. Thirsty is on his way so they can sign another talent they have been eying. Thirsty shows up. The only way they can get to Carlito is to go to a poker game but it has a huge buy-in.

Cookie and Porsha host a talent signing in the park to find their next big star while Thirsty and Lucious get the money they need. Porsha introduces her cousin who Cookie sees talent in. Moments later after watching him perform, Maya’s mom shows up.

At Empire, Becky and Gisele watch one of their oldest talent’s, TBD, perform in the studio. Jeff comes in. He wants to drop them. Becky gets angry and leaves to meet up with Jamal. They are having a night in together with junk food and gossip. He tells her he might have to end early for Kai. She gets mad.

Lucious shows up looking dapper in a new suit at the poker match. Cookie goes to check on Maya who is living with her new boyfriend.

Jamal has been eating candy and doesn’t realize they are edibles. He gets upset at Becky. She ruined his sobriety. Kai shows up to find them in animal themes feet pajamas hiding behind the couch. Jamal makes them laugh when he explains why he is so upset and how he thinks they won’t understand.

Cookie and Porsha come home from a long day to get a call from the local jail. It’s Maya. Cookie goes to bail her out. She got busted for drugs, holding for her new boyfriend. She asks Cookie to help her get her things from the apartment.

Gisele goes to talk to Jeff about her ideas. He doesn’t want to listen to what she has to say about TBD or anything else. He just wants her to do what he says. She thinks it all has something to do with the Lyons. He calls her crazy. After she leaves he looks at a picture of a young girl in his desk. He gets upset and tells himself to focus.

Kai is now in blue pajamas with all three of them hanging out and laughing. Becky jokes that Michael was her favorite. Kai shows her his ring from Jamal. She gets mad Jamal didn’t tell her.

Gisele has too much to drink and tells TBD that Jeff is a chump and wants to drop them. Meanwhile, Andre tells Hakeem he needs therapy. Hakeem doesn’t want therapy. He is still mad at Andre for Anika. Andre tells him that he would have had a 5-year-old son right now if Anika didn’t kill him. He is sorry for what he did and he plans to make it up to Hakeem until forever.

Kai tells Becky not to leave. Jamal is being an ass. They all end up making up and hugging. Becky calls Kai family now.

Cookie has been waiting for Maya. She goes up to see what she is doing. Maya tells her she changed her mind. She is staying. Cookie tries to tell her that her boyfriend is using her. Maya doesn’t care.

Back at the park, Cookie does a live video on social media. She is upset. She can’t fix it all, she cannot even fix her family. But she is ready to find a star, she knows how to do that.

Lucious finally gets an opportunity to try and win Carlito. He does it! Suddenly, just when he starts to clear the chips off the table several gunmen come in. Lucious pushes through a side door and runs for it.

Back at the house, Thirsty tells Lucious that Cookie’s favorite painting they used as collateral is gone. He plans to get it back. Across town, it hangs in Lucious’ friend’s house.

The next morning, Gisele and TBD knock at Lucious’ door.

In the future, the FBI shows photos to Lucious of Damian Cross and Cookie together.