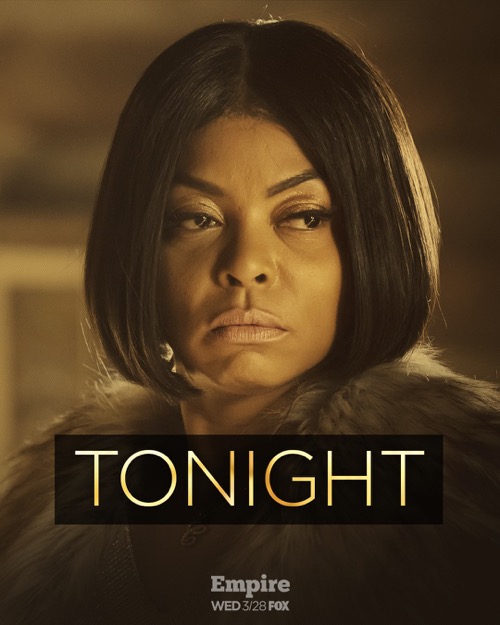 Tonight on FOX their blockbuster drama Empire airs with an all-new Wednesday, March 28, 2017, episode and we have your Empire recap below. On tonight’s Empire season 4 episode 10 Spring Premiere called,  “Birds in the Cage” as per the FOX synopsis, “Nurse Claudia takes her job to a new level when she kidnaps Lucious. To rescue him, Cookie must race against time and use the skills she learned in prison. Meanwhile, Andre, Jamal and Hakeem pick up the pieces from their battle with the Dubois family.”

Jamal is talking to Cookie and Thirsty. He is having trouble putting the murder behind him. Cookie tells him to go get some rest. She tells Thirsty that Lucious was supposed to come to the house last night but he never showed. He sent her a text saying he needed quality time away. Those are not words he would use.

Lucious comes to. He is in a house on a floor chained to a piano. Claudia is there. She tells him to relax.

Years prior, Cookie is in jail talking to her ladies about how they plan to take down the guard who raped Pound Cake. They get to the cafeteria where they plan to take him down, but it didn’t go as planned. Cookie gets thrown in the hole for 3 weeks.

Thirsty comes to see Cookie. He has the security feed from the hospital of the night Lucious went to visit Andre. Claudia is seen in the hall pushing a wheelchair. Thirsty can’t get in touch with Claudia. She is off the grid.

Claudia comes home to see Lucious who is struggling to free himself. She calls him Dwight and recalls how sweet and kind and brave he was before. He tells her to stop calling him that name. He is Lucious Lyon.

Tory and Hakeem are on stage performing together. Becky needs Lucious. She isn’t sure how to deal with questions regarding the family.

Thirsty has tracked down Claudia’s therapist. He brings her to see Cookie. Her therapist hasn’t seen her in weeks. Cookie asks her straight up – does she need to worry about Claudia? Her therapist says she has previously gone overboard with her methods before. She recalls how she cared for an athlete prior and wanted to bring him upstate to continue his therapy but his wife intervened.

Hakeem comes to see Jamal who has been staying in his apartment in the dark, depressed. He gets him off the couch with a pep talk.

Porsha and Becky are in the bathroom. Porsha has noticed that Becky is constantly peeing. Are you pregnant or something? Becky breaks down at Porsha’s question. She hugs her.

Lucious is playing the piano. He stops playing. Claudia asks him what is wrong. He tells her that music makes him feel safe, he is seeing clearly now. She comforts him. He grabs her and chokes her. She falls to the ground and tries to get away. She runs into the hot wood stove but manages to turn on bright lights and loud music. Lucious winces. She has given him medication that has heightened his receptors.

Thirsty calls Cookie. He has located an address upstate for property under Claudia’s father’s name.

Pound Cake comes to see Cookie in the hole. She admits she was the one who tipped off the guards because they promised she could see her baby and get out early.

Hakeem and Jamal visit Andre. He is embarrassed for them to see him like this. Jamal gets emotional. He didn’t want to kill anyone but he did. Diana tore them apart. Hakeem hugs Jamal as he cries. Andre stands from his wheelchair and comforts him. They are all in this together.

Lucious pulls himself off the ground. He apologizes to Claudia. Cookie pulls in the driveway. Claudia tells Lucious to get rid of her or she will slit her throat. Claudia answers the door with a sweet voice. She lets her in. Lucious is playing the piano. He pretends to be bothered by Cookie tracking him down. He tells her he is writing a song. He needs time to work on it. Doesn’t she have anything better to do?

Cookie cries on the drive back home. She realizes that Lucious was playing her song and that he wasn’t writing new music. Something is wrong. She stops the car.

Porsha and Becky sit and talk. Becky never thought she would be in this situation.

Claudia tries to talk to Lucious. He lunges at her. He tells her he loves Cookie. He will never love her. Claudia turns on the music and lights but blows a fuse. She leaves for a minute. Cookie comes in. She tells Lucious they need to go. He tells her he is chained to the piano. She runs off to find something. Claudia comes out of nowhere and hits Cookie in the face. She recalls prison. Being in the hole. Making it out. Getting beat but getting up as they all chanted her name. She comes to sitting at a table with her hands tied. Claudia tells Cookie she is trying to save Lucious. She loves him and he loves her. He told her so. Cookie laughs. Lucious explains that it was a mistake. He thought Claudia was Cookie. Cookie and Lucious start fighting, drudging up the past about Angelo and more. Claudia is in shock. All of these people they are involved with are dead. She calls them sick and twisted. Cookie and Lucious start fighting about jail, about how he stole her from her boyfriend Barry. Claudia tells them they do not love each other. Cookie tells Claudia that she isn’t leaving without Lucious and vice versa. Claudia puts a knife to Cookie’s neck. She is about to hurt her when Claudia’s therapist shows up.

Claudia won’t let her in. When she tries to reach the door, Claudia hits her and knocks her out. Inside, Cookie comes out of nowhere and attacks Claudia. They fight. Cookie ends up on the floor. Lucious saves her by hitting Claudia in the head. Lucious picks up an ax. Cookie tells him to kill her but Lucious refuses.

Andre wakes from a nightmare. He is panting. He repeats “I have to tell him.”