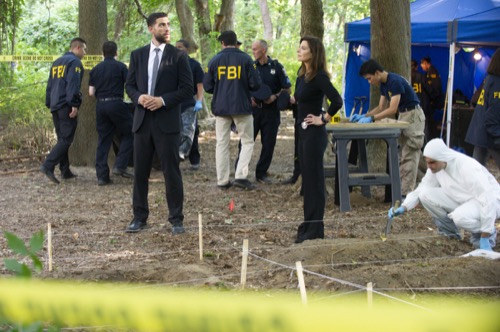 Tonight on CBS FBI premieres with an all-new Tuesday, October 9, 2018, season 1 episode 3 called, “Prey,” and we have your FBI recap below. On tonight’s FBI episode as per the CBS synopsis, “Bell, Zidan and the team investigate the murders of 18 young women with help from a survivor associated with the deceased.”

A family of three is arguing about going to the city. They hear something outside. It is raining. The father heads down the back stairs. A teen girl launches into his arms. She is crying, hysterical, bloody and dirty. He yells for his family to call 911.

The police head out into the woods from where she came from. They discover several graves and one that is empty. The girl must have been buried alive.

Bell and Omar show up. Bell thinks the suspect knows the wooded out of the way area. He seems comfortable, especially since he buried a girl alive. They head to the coroner. All of the victims were sex workers who had been stabbed more than 2 dozen times. They all have been branded as well with a crown that the killer attempted to remove. Bell thinks they are looking for a trafficker.

Bell and Omar meet with the victim who got away. She tells them she saw an ad online for work. She and her sister both applied. They were picked up by three Ukrainian men and brought to a basement blindfolded. They threatened to kill their families. She has not seen her sister since. They were rotated between several basements. In one she could hear waves. She was desperate so she asked one her johns to call the police.

Back at the office, Kristen has figured out who all 9 of the pics are. They also receive the 911 call from the john. They visit him. He denies it but breaks and tells them about what he saw.

Bell and Omar along with SWAT enter a building in the night. It is empty. They enter the basement to find nothing but beds and a wall with pictures made from make-up. In a back room there is a gurney with OBGYN stirrups. They are all disgusted. They find a silicone substance in the trash, the same material found in the breast implant of one of the dead victims.

Bell and Omar meet with the real estate agent overseeing the property they discovered. The property belongs to a rich man who lives in London. They call into the office to get surveillance teams to the man’s other properties.

They talk to their victim again who tells them an older Ukrainian doctor often came to visit and help the girls. They track him down and head to his office. Before they can get inside, someone falls on top of the car next to them from the floor above. It’s the doc. They head in and separate. Bell is attacked by what appears to be the man they are looking for called Snake. He leaves a bloody handprint behind on the wall.

Bell gets care from the medics. Jube calls and tells them he has Snake’s identity and it is his cousin who owns the employment agency. They head to Snake’s property that looks out on the place where the victims were buried. They also find the skin of the victims that were branded and a photo of the real estate agent. She lied to them.

Back at the office, they try to get warrants for the rest of the properties but that will take more time. They decide to roll out the sting. Jubal will play their john. They head to a hotel and stakeout. A car pulls up with 3 ladies. They head inside. Jubal pays them and tells them to wait a moment. Snake is waiting in the car. Bell and Omar sneak up on him and grab him. Jubal comes out. They got the three girls but the raids on the other houses came up empty.

Bell goes in to talk to Snake. She plans to play off of his sick side and let him see her cut and bruises since he likes pain and suffering. She calls him on his perverted side. Details what he has been doing all this time with the girls. He gets angry when she gets a detail wrong. She gains leverage on him by telling him he isn’t going to make it in prison unless he tells her where the girls are.

They stake out a house before going in. They see a man with a gun. The FBI heads in with Bell and Omar. They find dozens of girls in the cellar. Bell finds the victim’s sister Brooke.

Bell heads to the hospital after to see the sisters. She tells the victim she is a fighter. She needs to keep going.