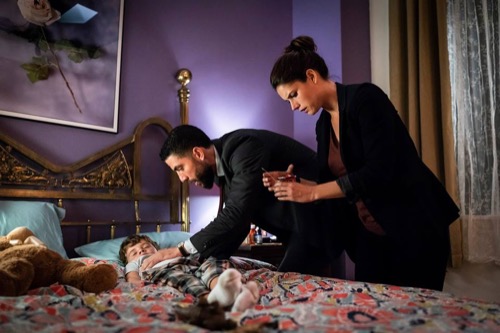 Tonight on CBS FBI premieres with an all-new Tuesday, October 30, 2018, season 1 episode 6 called, “Family Man,” and we have your FBI recap below. On tonight’s FBI episode as per the CBS synopsis, “After a senator’s daughter is kidnapped and held for ransom, the FBI is called in to assist with finding the child before their time limit expires. However, in order to do so, they must dig into the senator’s past for clues to who did this to his family.”

A senator, Gary, and his wife arrive home. Their daughter is gone and the nanny. The senator gets an email ransom note with a video of their baby with a gun in her lap. The note calls Gary a liar.

Omar and Maggie arrive at the home of the family. Maggie talks to the mother who doesn’t think the nanny is behind this. Omar talks to the senator alone and asks him who he thinks could have done this. Gary tells him no-one in particular. He is not guilty of having an affair or drugs.

Gary and his wife will pay anything. Omar and Maggie look over the security footage. After seeing the timing of the kidnappers with the abduction and the note, they think they have a camera inside. They check the baby’s room. They find a camera in one of the stuffed animals. The parents cannot say for sure where the stuffed animal came from.

The police call in. They found the kidnappers van and the nanny dead inside. Meanwhile, Kristen didn’t find any red flags in Gary’s past. She did find a press release about Gary who was being extorted by a woman.

Omar and Maggie asks Gary about the woman. He admits years ago that a woman named Nicole and he had a brief affair. She was beautiful but nuts and showed up at his house 2 weeks ago looking for money. She told him she was sick.

Maggie and Omar go to Nicole’s. She is there with her son, who looks just like Gary. She tells them she has ALS. But she had nothing to do with this. She wanted money from him. He has paid her before to go away.

Omar and Maggie go to visit one of Gary’s associates from the construction industry prior to him going into politics.

Maggie and Omar try to talk a journalist out of running a story about Gary so the kidnappers don’t do anything crazy.

The kidnappers call in with a meeting place. Omar and Maggie head there after they cannot trace the call. The kidnappers want the ransom in bitcoin. Gary answers his phone in the park just as the team realizes the journalist broke the news about the kidnapping. The kidnappers are angry and tell Gary to say goodbye to his daughter. The team tries to trace the call as Gary pleads with them.

They suspect Gary’s campaign manager Chris may have leaked the story. They pull him in to interrogation. He is adamant that he didn’t do anything. They should ask the senator. They head to talk to Gary and confront him. Gary gets angry but admits and old friend did go a little overboard with Nicole.

Omar and Maggie go back to see Nicole. They find her dead in her apartment after taking pills. Her son is on the other room. He is on the bed unconscious. It looks like she gave him crushed up pills in his pudding. Omar hits him with narcan. He comes to.

Back at headquarters, they theorize that this was all Nicole and a partner. They go to see Gary to ask him about a man named Joe, an old friend who called him a liar. Gary admits Joe asked for help months prior but refused to help.

They head to Joe’s and check his house. They come up with nothing. He denies any wrongdoing. But they have to be connected, they found Joe’s prints at Nicole’s and he is broke. His son just died in prison too ten days ago.

They pull Joe in for interrogation. He wont talk so they bring Gary in. Joe gets angry and tells Gary he should have helped him when he called for help with his son. Gary tells him he couldn’t have helped. He needs to know where his daughter is.

The SWAT team arrives at a building. There are several men inside. They take them down. Maggie and Omar head in to find the baby. They bring the baby to Gary and his wife.

Maggie admits that she once gave false hope to a family and it didn’t work out. But this one did. Gary’s wife catches Maggie on the way out and asks about her husband’s son. She would like to adopt him. Maggie smiles wide and sits to talk.