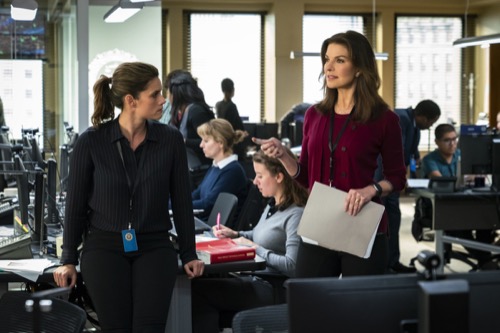 Tonight on CBS FBI premieres with an all-new Tuesday, November 13, 2018, season 1 episode 7 called, “Cops and Robbers,” and we have your FBI recap below. On tonight’s FBI episode as per the CBS synopsis, “Maggie and OA hunt down a ruthless group of robbers who are posing as NYPD officers to target armored trucks.”

A group of guys dressed up as NYPD hijacked an armored trunk on tonight’s all-new episode of “FBI”.  The group had been three guys. Two of them had been white and one of them had been black however they were all as violent as each other and they threatened to kill the guards if they didn’t get what they wanted. They also had guns on them and so they forced the guards to comply before they made off with 2.6 million dollars in cash. It took hours for the crime to be reported to the real cops and because it was a bank job, the feds were brought in. The FBI had made a name for themselves by hunting violent bank robbers and they wanted to continue in the tradition of apprehending them. They began their investigation into this case by checking the car that was used at the scene.

The fake cops had gotten the armored car to pull over by flashing their badges and pretending that they needed assistance. It worked just long enough for the robbers to get the job on the security guards and so the car used for the crime was key. It belonged to someone who didn’t have a record and had no idea why the feds were asking him questions, but he does have a brother. The brother was Nick Salerno and he had a record. He was known for armed robbery and while he claimed to be keeping his nose clean that didn’t stop federal agents from looking into him. Salerno had access to the car, was a convicted criminal, and didn’t really have an alibi for the heist. And so everyone tried to find out who were his accomplices.

They hadn’t really gotten anywhere when they finally got evidence putting Salerno as the driver of the car that night. They went to arrest him and unfortunately they had been too late. Salerno had been killed and everyone knew that one of his new friends did it. Yet, the only people they saw Salerno in contact with were those on the job. He went into construction after he got out of prison and so likely he was in business with some friends from work. Maggie and OA were confirming one of their suspects with the only eye-witnesses they had and they found their proof. They were going to make the arrest when another heist occurred. With this one being different because the bank robbers used explosives.

The robbers used explosives to stop the truck and then began shooting at the guards were in a hurry to abandoned their vehicle. That time they were no witnesses and the robbers still made off with millions of dollars. Everyone wanted to know what made the second one different and it seems their suspect Healy was the escalating things. He was an expert in explosives and he stole a large amount of C4 from his construction site. Healy being confirmed as a suspect also helped the FBI figure out who else had been involved. They found footage of Healy planning the first heist and the guys he met up matched the description of their robbers. They even saw Salerno in the footage and they also spotted a fourth man.

The fourth man hadn’t been at the bank robbery because he was their inside man. He fed them information and his actions more or less contributed to Salerno’s death in the aftermath. Maggie and OA used that information to get their guy to talk and he said that he only got involved because he thought no one was supposed to get hurt. It turns out Jason had been naive. He was a former Army Ranger who came back from deployment needing help and instead they left him hanging. Jason blames his country for abandoning him and that’s why he didn’t mind stealing from the banks. He even manipulated his girlfriend into revealing information because she knew all the routes the trucks took.

There wasn’t a relationship that Jason hadn’t spat on and so they told him he wasn’t betraying anyone as it was his buddies that were escalating the violence. The other two were going to kill again and the feds needed Jason’s help to stop them. So Jason explained a few things. Like how he got involved. He said Salerno was his drug dealer until one day Jason couldn’t pay and Salerno said that there was another way to wipe out his debt. He said that’s when Salerno introduced him to the others and that soon it was Healy that was giving the orders. Jason claimed to have believed them when they said no one was going hurt and the fact that went back on that had turned his stomach. He was the one that said he was now willing to help the FBI take down Healy and Jenkins.

Only Jason was still lying to everyone. The feds had a wire strapped to him and he was supposed to meet with the others, but Jason led Maggie and OA into a trap. They later went running into a building when they thought Jason’s life was at stake and it turns out the whole building had been wired to blow. The FBI agents had to work with the others to get out of the building alive and by then Jason had run off with his friends. The group was trying to get away on foot and so the FBI carried out a massive manhunt to flush them out. They eventually caught Healy and Jenkins easily. And so the only one that was proving harder to get was Jason. And Jason had made things personal for OA.

OA thought he built up some rapport with Jason because they had both served overseas and had seen some things yet Jason betrayed him afterward because he hadn’t wanted to go jail and he still didn’t. By time OA found him, Jason was raising his gun and basically demanding to be shot. OA couldn’t do it and so Maggie shot him. She didn’t injure him too badly and Jason was going to make it.

Maggie also could have reported OA because OA was the one that trusted Jason to begin with and nearly killed the both of them, only she covered for her partner and she asked him to be honest with her.

If he ever needed to talk then her door was open.