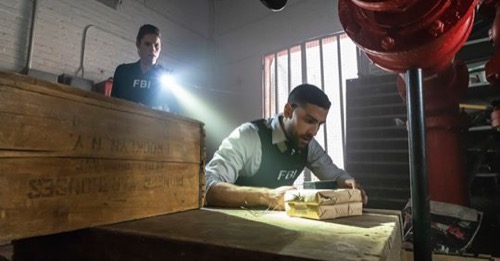 Tonight on CBS FBI premieres with an all-new Tuesday, November 20, 2018, season 1 episode 8 called, “This Land Is Your Land,” and we have your FBI recap below. On tonight’s FBI episode as per the CBS synopsis, “Maggie and OA lead the search for an abducted former biological weapons chemist.”

A woman has just met with her father at a hotel who tells his daughter her Visa has been extended. She can stay in New York longer. She is thrilled. He leaves to go outside with his men when he is abducted by masked men. Bell and OA arrive on the scene and are told the man who was abducted is a Russia weapons chemist who recently wrote a book about chemical weapons and more. They speak to his daughter who is hysterical. They were supposed to be protecting her father. OA gets irritated with the woman.

Dana meets with a Russian official she thinks could be responsible for the abduction. He denies it, telling her he only helped Benov get a visa and left him unharmed. Meanwhile, the team narrows down what types of guns killed the agents escorting Benov. They catch a break and meet up with a gun seller name Kurt. Bell pretends to be a street buyer to see what he has. He shows her a truck full of rifles and more. OA comes from behind. They take him in. Jubal offers him a deal for a name of who he sold to. He quickly accepts the offer. He has video footage of the man’s face but doesn’t have a name.

The team works on their new leader, two local brothers. They find background on the family and head to see their sister. When they arrive she is on her way out and appears very nervous. OA makes his way into the house and sees Freddy, one of the brothers trying to make a run for it. They take the brother and sister to headquarters. The sister breaks down and tells Bell where to find her brothers. Meanwhile, Jubal goes to see the father in jail who won’t talk.

OA apologizes to Bell about his irritation with the woman and his issues with this case. They head out to make their way through the woods and to a farm where the brothers are and could be holding the chemist. A van pulls up t the FBI tents. Somehow their cover has been blown. Jubal calls to execute the job but it is too late. The team is under fire. One agent is shot in the stomach. Bell tries to help him. They hide behind a tree as shots are fired. Bell hits one but they take off.

OA arrives to help Bell and the agent who was shot. They get out safely. Back at the tents, they discover there are more men in the house and chemical weapons. OA thinks Bell should negotiate. They all agree. They make their way closer to the house. Bell tries to speak with them through a megaphone. One of them is injured. Bell offers to leave as long as they hand over the chemist. Maggie sees kids come to the window. The man preaches his words. The kids scream. Maggie runs in. OA goes after her. Just as he comes to the house he sees Maggie carrying out the kids. The brothers are also being escorted out but one is missing. There is another building. OA heads there with backup.

OA finds the chemist but no-one else. They bring him back to the tent. He tells them the brother was testing cyanide on the farm animals and then left an hour ago. He was going to the city for he called Judgment Day.

After putting it all together, they realize the brother is going to the courthouse where his father will be. They head there. They walk the halls and hear screams coming from a door. They let themselves in slowly. The brother Bryan is in there. He has a chemical weapon in his hand and he is ready to release it. OA and Bell talk him down and take him out of the court.

OA and Bell watch the chemist and his daughter reunite. Later, as Dana heads home for the night the Russian official gets out of his car. He wants her to know he didn’t appreciate the way she spoke to him before. He is watching her too.