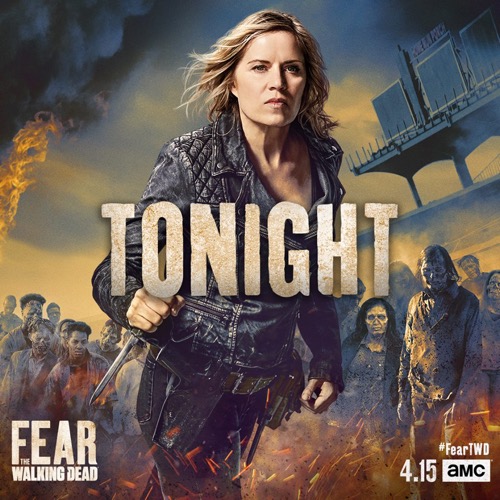 On AMC tonight Fear The Walking Dead (FTWD) airs with an all-new Sunday, April 15, 2018, episode and we have your Fear The Walking Dead Recap below! On tonight’s FTWD season 4 episode 1 premiere called, “What’s Your Story?” as per the AMC synopsis,  “A lone traveler’s wearying journey is interrupted by new acquaintances, some who become friends, others who becomes foes. Season 4 premiere.”

A cowboy, all alone beside his vehicle thinks he hears someone and talks to them, tells him about his life and tries to get them to communicate with him. All of a sudden there is a walker and our introduction to Morgan, from the Walking Dead, the cowboy wasn’t hearing things after all. It’s the next morning and Jesus is also there from the Walking Dead and he is talking to Morgan. He says that he thought they could continue on with their acquaintance. He says the reason they fought is that they care about people. Jesus is actually not there, Morgan was daydreaming.

Now he dreams about Carol and she is asking him to return to the Kingdom. She says she didn’t know who she was but she knows who is and he belongs to people who he cares about. We hear banging, now Morgan is speaking to Rick who tells him he wouldn’t be there if it wasn’t for him. He tells Morgan that he is hurt and wants him to come back with him, not to waste one more second of his life. Morgan tells Rick that that is not him anymore. Rick argues that it is, he is connected. Rick urges Morgan to come back, tells him he can hide but he can’t run. Morgan packs up his backpack, takes his stick and walks off.

Morgan is walking down a street when he comes to a crossroad, he finds a place to sit and stays there overnight thinking about what Rick told him. In the morning, Morgan gets up and starts running. He arrives at a small town, finds a car and hot wires it, the gas tank is full. Morgan is seen walking again, this time in the wilderness, he sees some people, but ignores them and continues on his way.

Morgan fins an empty metal container to rest in, then continues on his way. He finds another car, drives it to another location which brings him to some buildings, there are walkers around. Then Morgan finds another vehicle but there is a guy inside who looks in bad shape and he is whimpering. Morgan leaves him some bandages and antiseptic, the guy yells at him to take his stuff back. Morgan says he is just trying to help, he takes his stuff, shuts the door and leaves.

It’s raining, Morgan is still walking and it’s night now. He sees a walker but he hears someone talking. Someone shoots the walker, it’s the cowboy, they start talking to each other. The cowboy’s name is John and he offers to cook Morgan a meal,he’s got beans and he’s got beans, Morgan declines. John asks Morgan where he is from, he says back east and he ran all the way there. John wants to know if he met up with a woman who has the same gun as him, Morgan says no.

Morgan stays in the cowboy’s vehicle overnight but sets out before sunrise. Morgan finds a tent and all of a sudden gets hit on the head. Morgan wakes up to two guys who have guns, he tells them he is just passing through and just wants to go. All of a sudden, cowboy shoots one of the guys guns out of his hands and says he has no beef with them, he is just looking out for his friend.

Another guy is behind cowboy, now these new goys have cowboy and Morgan at their mercy. A girl drives up in a big truck, she says she likes new people and they look hungry. She says she has noodles in the back, she offers them for Morgan and Cowboy. Morgan and Cowboy are in her truck, her name is Althea and she tells them that she didn’t rescue them from the goodness of her heart, they owe her. The truck stops, Althea goes to the back and Cowboy pulls a gun on her, she tells them she just has questions for them, she is a journalist. Althea interviews Cowboy first, he says he was alone for a long time, once he was with Laura.

Cowboy says he is still looking for Laura, they just need to find their way back to each other. Althea then interviews Morgan, he tells her there are no news stations left, what is the point. Althea says she saved him, he goes to give her good and she says she doesn’t need it, she just wants his story. Morgan tells her he didn’t ask her to save him.

Morgan leaves the food and walks away, Cowboy follows him and gives him clean socks. Morgan says thank you and is about to leave, Cowboy tells him to stop – there is a pickup truck not far from them, its the guys that Althea saved them from. All of a sudden there are a couple of guys and they have guns on Althea, Cowboy and Morgan. One of the guys asks Althea for the keys to her truck. Another one asks Morgan to turn around, he takes out two with his stick while cowboy takes another one out with his gun. Althea tries to make a run for is, but she doesn’t make it. Cowboy lets out a bunch of walkers from a trailer.

Meanwhile, Althea has the keys to the truck and she throws them far so nobody can take off with her truck. One of the bad guys gets attacked buy a walker while Morgan gets shot in the leg, but that doesn’t stop Morgan, he jumps from one trailer to the next and takes out the guy who shot him with a stick – they fall into a trailer with walkers, the guy gets attacked, Morgan makes it out alive.

Althea finds her keys, she shoots all the walkers with the ammo from her truck, Morgan and Cowboy are fine. The three drive off. Althea tells Morgan that he still owes her. They pull over the truck and Morgan does his interview for Althea. He says he’s been running, driving and walking from Virginia. He tells her about Alexandria and the Kingdom with a king and a pet tiger – he says there was a fight with another big group and even though they won, he left.

Morgan then asks her questions, how did she get the truck and why asking complete strangers questions is so important to her. Morgan packs up and says he is leaving. Cowboy is worried, Althea tells him to asks him to tell her one real thing and then they can part ways. Morgan says he loses people and then he loses himself. Morgan has left, he is on his own and limping. He finds a station wagon and it appears to be empty. He is about to continue on his way when he see someone down the road limping as well.

All of a sudden there are two walkers following Morgan. Morgan falls down, drops his stick and the two walkers gain speed on him. Cowboy is there, he saves Morgan by killing the two walkers. They catch up with the guy who was limping and it is another walker. Morgan is back in the truck with Althea and Cowboy, he says no more questions and he is only staying until his leg is healed. Althea is driving, she says she is taking Cowboy to find Laura. All of a sudden, there is somebody on the road and it is not a walker.

They stop the truck to go speak to the stranger, it is a girl, she is crying and sating there are bad people there. All of a sudden guys come out of the grass with guns and take them over. Althea asks the girl what the hell her story is.