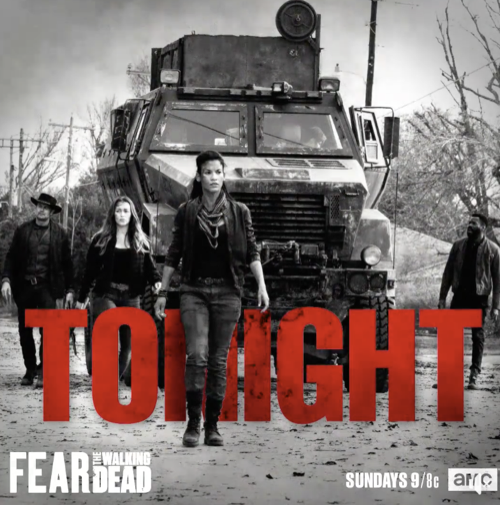 On AMC tonight Fear The Walking Dead (FTWD) airs with an all-new Sunday, April 29, 2018, episode and we have your Fear The Walking Dead Recap below! On tonight’s FTWD season 4 episode 3 called, “Good out Here” as per the AMC synopsis,  “Madison and Morgan try to help Nick find inner peace. A quest for revenge exacts its toll on the group.”

Nick cuts down all the crops and burns them; he looks very frustrated.

Then we see Nick with Morgan and the others in a van, Victor is driving. Althea pulls a knife on one of the guys and there is a struggle that throws everyone around, Lucie loses control of the truck and it goes over the side of the road. Nick passes out and the last thing he sees is a waker coming towards him.

We flip back to the crops, Madison says she is going on a run, Nick says he is going with her.

Back to the crash, Althea, Morgan and John Dorie now have control of the truck, the rest are tied up until Althea cuts the ties that were binding all their hands. Morgan stays back with Nick who Althea has now tied back up; the rest head out. Morgan cuts the ties on Nick’s hands. Nick tries to fight Morgan and he quickly gives him a couple of whacks with his stick, Nick gives up. Nick goes to his backpack and gets and peanut butter bar and shares it with Morgan. Morgan tells Nick he better not move more than five feet from the truck. Nick goes into the truck and watches the interview Althea did with John Dorie. Morgan is up on the street and sees a car coming, he runs down the hill as fast as he can and hopes the car doesn’t see them. Nick gets into a struggle with Morgan, the horn goes off and is stuck which causes wakers to flock to the truck while Nick runs away down the road.

Althea and the rest are in a small town, they see some cables that may be able to help them to get the truck out of the ditch they are stuck in. Victor and Althea are talking, she wants their story; Victor says he will consider it. Meanwhile, Nick is still running and stops to kneel down in some blue flowers that remind him of Madison. All of a sudden, Nick has two walkers on him and he is almost done in, Morgan saves him. Morgan and Nick are walking down the road, he is worried that when the rest return they will wonder what happened to them. Morgan assures him that they will find them.

We switch back to when Nick and Madison went out for a run and bump into Charlie and one one of the guys she is with. Nick pulls a knife on the guy, Madison urges him to stop and let the guy go. Charlie and the guy leave.

Back to Morgan and Nick who asks him questions about his life, Morgan gets upset and doesn’t want to talk about it. The rest return to the truck to find Morgan and Nick gone. John and Lucie go to look for them, the rest stay with the truck and help Althea get it from the walkers that are now surrounding it in exchange for their story and she told them where she got the flag.

Morgan bumps into Nick’s enemy who Nick immediately tries to go after with a hammer, but Morgan intervenes and tries to stop him.

Back to Nick out on the run with Madison and he tells her that being outside makes him feel trapped.

We see Morgan walking and thinking back to Nick and worried about him. Meanwhile, Nick fought the guy and killed him.

John Dorie is out with Lucie, they are still on the trail when they rest show up with the truck.

Morgan goes back to Nick to find him full of blood and the other guy dead. Morgan tells Nick that he lost his wife, his son and his friends before he lost himself. He tells Nick he knows where he is because he was there, never thought he could find his way out until he found this man that helped him and showed him that life is precious. Morgan shows Nick the book he was reading,

Then we see Madison and Nick back on the run and they drive up to a field of bluebonnet flowers.

The rest run to Nick when they hear a gunshot, Charlie has shot him. Nick is not going to make it, blood is coming out of his mouth. Morgan looks sad, everyone else is distraught. Nick is gone.