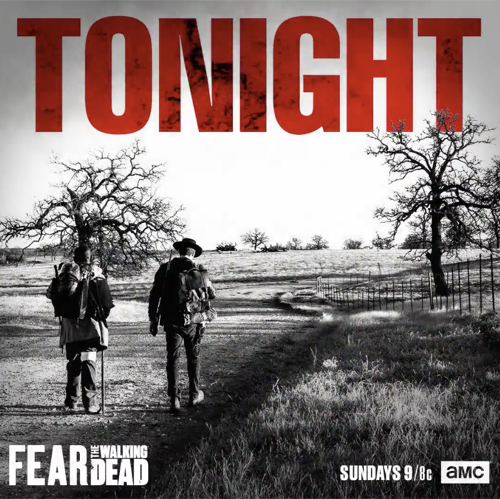 On AMC tonight Fear The Walking Dead (FTWD) airs with an all-new Sunday, May 13, 2018, episode and we have your Fear The Walking Dead Recap below! On tonight’s FTWD season 4 episode 5 called, “Laura” as per the AMC synopsis,  “The arrival of a wounded visitor in John Dorie’s life forces him to change his ways.”

We see John loading his pistol when a walker comes out of the water and he kills him with a blow to the head. The next morning, John is playing Scrabble with himself and ten fries an egg and makes some coffee. John then goes to fill up the water reservoir and gathers some food to eat.

John makes some popcorn and watches a movie. Time for bed, but John can’t sleep because he hears something outside, this time it is not a walker, it is a woman and she is alive, although she is injured. John takes care of her wound and she falls asleep.

The next morning, John goes to get water and notices the woman is gone; she is at his truck and wants to leave, he tells her the keys are under the visor. John tells her she is inured and the truck doesn’t work. He tells her that if she wants to leave he will send her with food and water and change her bandage. They go back in the house and she removes the bandage, she needs stitches and asks him to do it, he does.

Later, John makes fish stew, she enjoys it and he tells her she looks like a Laura. John tells her she can stay as long as she needs. John gives her the bed, he says he will take the couch because he doesn’t sleep that much anyway. John guesses that she is a nurse, he is right.

[2018-05-13, 10:02:59 PM] Rosie LeBlanc: It is late, she wakes up and finds John outside loading and cleaning his pistols. The next morning John wakes up and hears another walker, he goes outside and kills not one, but two. John is heading to the store,, she wants to go with him, they get in a boat and he is rowing. She asks John what he used to do before, he says he was a police officer. They arrive at a dock and head to the general store. They head in and he tells her to take whatever she wants. They take what the need and head out of the store, they fix a fence together and when a walker comes up she kills it. They are back at John’s cabin, he is eating popcorn and watching a movie, she gets up for some water – she sits down with him to watch the movie. John falls asleep, he wakes up and Laura says she lost her child.

The next day, Laura asks John how to fish. They head in the water and John shows her how to fly fish. She catches one and he shows her how to cut it and then they cook and eat it together. Laura joins John for a game of Scrabble. John takes out Laura’s stitches, she tells him it will take her a few days to pack things, but she will be leaving.

Another walker comes ashore and John says he is going to have to go patch the bridge where they are coming from; Laura wants to help him and says it is the least she can do. Laura brought one of his guns and John is upset, he says guns are just going to bring more wakers.A walker gets in the truck and Laura tells John to shoot him, he won’t, he manages to stab him but it was close.

They get back to the cabin and are washing up, he tells Laura that he didn’t get bit and he didn’t mean for it to get as bad as it did. Laura asks him whey he doesn’t like to use his guns, he says that he shot a guy in the leg who was robbing a store and the guy bled out. People thought he was a hero, he didn’t. Meanwhile, more and more walkers are falling off the bridge and it is dark outside. Laura and John wake up and there are tons of walkers coming towards the cabin. There are so many, but thankfully John has a ditch built that surrounds the cabin and they are all falling in. All the walkers have to be killed though and they are not using guns, Laura has a close call, she falls in a ditch. John gets his guns and starts shooting, he saves Laura’s life.

Laura and John are sitting on the steps of the cottage and tells he may not think he is a hero, but she does. John gives her one of his guns, he says if she is leaving, he needs her to take it.

Laura and Jon go to sit on the couch and he says he is going outside to sit on the porch, Laura follows him and asks him what is wrong. John tells her he loves her and didn’t want her to know. He tells her that he doesn’t want her to leave and if she wants to be on her own, he will leave. Laura rushes to him and kisses him. The next morning, John wakes up and he alone. Laura leaves written on a table in Scrabble tiles, “I love you too, I’m sorry.”

We fast forward and John is with Morgan, in a small case he has the Scrabble tiles that Laura left him; Morgan says she loved him too. John says maybe he should have waited to tell her, Morgan says no, not in this world. Morgan then tells him that they should not waste another second, they get up and they both walk off.