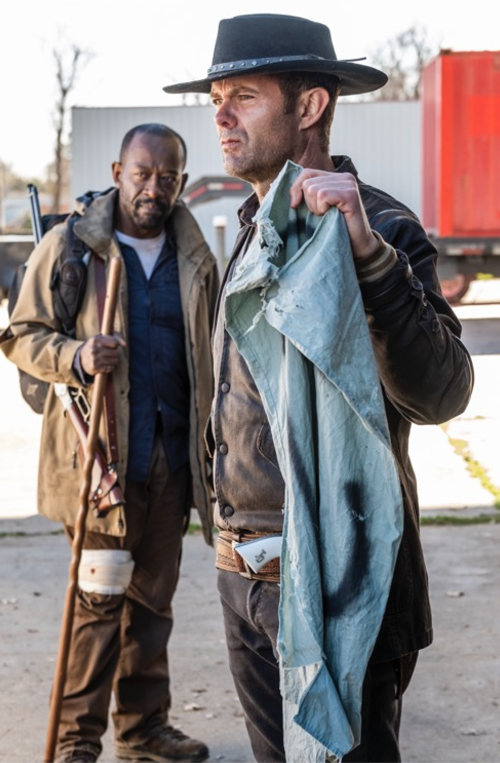 On AMC tonight Fear The Walking Dead (FTWD) airs with an all-new Sunday, May 20, 2018, episode and we have your Fear The Walking Dead Recap below! On tonight’s FTWD season 4 episode 6 called, “Just in Case” as per the AMC synopsis,  “Strand wrestles with Madison’s decisions while things take an unexpected turn at the Stadium. Madison begins to trust Naomi.”

John finds a guy raiding a place and pulls a gun on him. John tells him he is putting his gun in the holster and will not kill him if he doesn’t go for his gun. Morgan is there as well, the guy is angry and Morgan tells him not to be stupid, The guy goes for his gun and John shoots his finger off. The guy then speaks and asks John what he wants, he says he wants answers.

John asks who the guy is meeting up with next, he says nobody but John finds a map in his pocket. John is about to shoot him in the head and Morgan tells him to stop. Morgan warns the guy to tells his people not to follow the map because people are going there that will want to kill him and his people. John just wants to know what happened to Naomi, he hopes she didn’t suffer.

We flashback to Naomi removing shards of glass from Alicia’s arm, Madison thanks her for patching her up.

Back again, Victor is with Nick and Luciana. Victor walks away with Cole and thanks him for coming. Cole thanks him for saving him time, for telling him who he really is before he found out.

Madison walks up and asks Victor if he is ok, he says people are getting irritable. She found a bottle of alcohol in the back of the pantry and sits down to share it with him. Victor asks her why she saved him after what he did, she says that she wasn’t going to let him drown. He says she didn’t just pull him out of the cave, she nursed him back to health, why. She says because she knows who he really is and she likes to drink with him.

Naomi tries to sneak out to get some military rations and is stopped. Victor asks her if there are people there she knows, she says no but it is dangerous. Victor and Madison head out with her, Nick closes the gate. They arrive at a motel and decide to stop for the night; it looks in pretty good shape, but the windows are loose so they decide to try the office instead and there are a few walkers to kill off. They find some guns inside and some walkers that are already dead. It appears they killed each other over a few cans of beans. Victor finds some food, they all sit down to enjoy together. Madison talks about her life how she started in Mexico. Victor asks Naomi where they are headed, she tells him to an abandoned shelter where nobody would want to go in for anything, she is sure the supplies are there. Naomi admits that she was headed out when Viv stopped her, Victor asks for the keys and looks upset. Madison says its no big deal, she told the truth – they all head to sleep. Madison wakes up and tells Victor to wake up, Naomi is gone.

Naomi arrives at the Fema shelter, there are a lot of walkers inside a building.

Victor and Madison head out in search of Naomi – he is not happy about it.

Naomi is going through the building, looking around. She sees a lot of children’s things, a small bed, clothes, and toys. SHe heads inside a caged room, opens a combination look and finds a book about planting, guns, and keys. Naomi went in through the back of the building, the walkers are at the front and if they notice her, they will come after her. she looks up at the wall and sees children’s paintings, she collapses to the floor and the walkers hear the noise and come after her. Naomi is desperate, she is trying to run from them, she starts to panic when they start coming at her. There are too many and she starts to panic when they start grabbing at her. She finds a structure and tries to climb it, she gets up and is ok, the walkers are all at the bottom and she is crying.

Victor and Madison arrive and he tells Madison he thinks he can get to Naomi and save her. Victor throws a rope across and Naomi has to crawl across it. She tries but it is hard and Victor is slipping with the rope. Madison tries to help, all the walkers are under Naomi and could attack at any moment. The three get out, Victor locks the door and they are safe, the walkers are trapped inside. Naomi says that she had to come here on her own, these were good people, people she thought she could be safe with. She says she was with her daughter, her name was Rose and she swore she wasn’t going to die like her husband did. She says there was this woman named Ellen, she taught her how to make it on the outside, classes called JIC, Just In Case. One day, her daughter was sick and Naomi left to get antibiotics, it took her three days. She found the medicine and when she returned her daughter was dead, she turned and everyone else did too. Naomi blames herself for everyone here having turned.

Victor tells Naomi she did what she did, what life told her to do and so did he. He says Madison taught him that they can start over, they all can.

Madison, Victor, and Naomi are back. Cole tells Victor he didn’t think they could pull this off, he says he didn’t, it was all Madison.

Victor tells Madison they need to talk, she says he won today, please leave it at that.

The Vultures have packed up and left for now.

Madison tells Alicia she is going to tell her to do something and she doesn’t want to talk about she just wants her to do it. She wants her to grab some rations, a few medical supplies, rifles from the armory and put them in the land rover, park it at the back of the motor pool, keep it quiet, nobody needs to know – just in case.

We now move forward to present day, Alicia sees a van coming; it is John and Morgan, they tell them they are there to help. Morgan tells them the people they are looking for are not coming, they found them and told them not to come. Morgan tells them he was with Nick and should have told him. All of a sudden trucks and vans are coming, about ten of them. It’s the vultures, Mel comes out with his people with their guns pointed, he tells Alicia he is sorry for killing her brother Nick, she says she is not sorry that Nick killed his brother Ennis. Morgan gets in the middle and tells them it doesn’t have to go down like this. A land rover pulls up and Naomi gets up, John calls her Laura and goes to her. Alicia screams no and shoots John right in the heart.