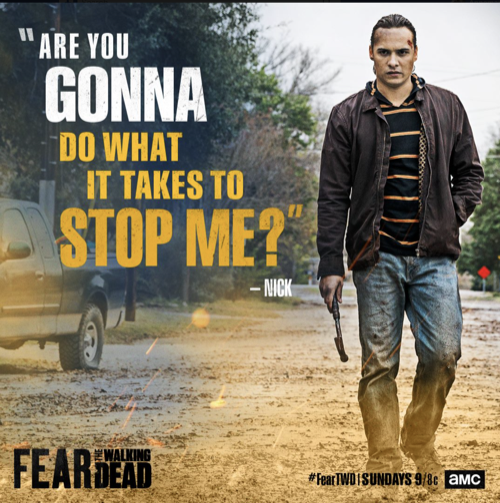 On AMC tonight Fear The Walking Dead (FTWD) airs with an all-new Sunday, May 6, 2018, episode and we have your Fear The Walking Dead Recap below! On tonight’s FTWD season 4 episode 4 called, “Buried” as per the AMC synopsis,  “Al’s questioning uncovers some surprising truths about the group’s past. John Dorie receives unexpected news.”

Althea takes a video of Victor and asked he ended up there. Luciana starts talking and she tells of when they started to stretch their rations, cattle feed pancakes. Madison wanted to go on a run and hoped that there would be better food for them than the people in the parking area didn’t get to yet. We see Nick with Luciana, they stop at a library, she tells him they are not going to find food there. Luciana tells Althea, she went there because she thought it would be good for him and for her. Inside, Nick sees a poster of a cat and take it. He tells Luciana he wants to get books for people to read. Luciana tells Althea that Charlie killed Nick, they tried to help her before that but were unsuccessful. John tells Moran that he used to be a police officer and he knows that Morgan is going to be on his way soon. Morgan says that once Nick is buried he will be on his way, he is better on his own.

Alicia starts talking and tells about when she was in the water with Naomi and there were walkers all around them; they make it, but both fall down a water slide and are almost done in. The women fight for their lives, with Alicia being in the most control having found a bar. The women escape and find supplies; lost of medical supplies. Naomi hands Alicia binoculars to see what else is around them and when she is looking, Naomi disappears. Naomi tries to make a run for it, but there is no gas in the car. Alicia catches up with her and tells her she is either in out. Alicia tells a story about her wanting to run off once, but she came back.

Althea asks Luciana if she ever felt like leaving and she says yes. Then we go back to the time she was in the library with Nick and she tells him she wants to leave, to start over somewhere else. She has a book of southwestern United States and wanted to open up any page, wherever it says, that is where she wanted to go – she tells Althea she should never have opened that book.

Madison goes outside the gate – she won’t give any info to the others, but she wants to work with them. Mel tells Madison that she has the story wrong about he and Ennis leaving, he tried to convince everyone to stay, he told them they could save the place, they listened, then the fire got close and his brother and he were the only ones that made it out alive.

Naomi tells Alicia about being a nurse and tries to encourage her to speak to her mom and leave the stadium.

Cole and Victor went out on a run and the helped each other kill walkers – Cole narrowly escaped death thanks to Victor. They find supplies and Victor is going to take them, Cole says he will have nothing to do with it, but in the end, Victor returns to Madison and the group with the supplies.

Luciana tells Althea that the page they landed on was north.

Alicia encourages Noami to speak to Madison, she tells her he wants to set up an infirmary.

Its dark, the stop and dig up weapons; they are going after the ones who killed Nick. Althea says she is not joining them. Victor says they know where the Vultures are meeting next. Althea wants the truth, Victor tells her to join them and she will find out. They bury Nick, Alicia is the first to walk away from the grave. They load up the truck with ammunition, John recognizes a backpack that belonged to Laura aka Naomi. Luciana tells him Naomi didn’t make it out of the stadium, she is dead. John says it is not true, she is out there somewhere. John is upset, he takes a moment to think and walks off, Morgan stays with him and tells the rest to go. Althea says she is going to find out what happened and come back for them. Morgan tells John he is sorry.