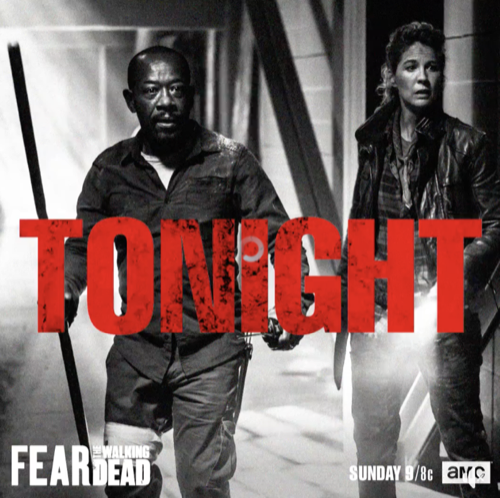 On AMC tonight Fear The Walking Dead (FTWD) airs with an all-new Sunday, June 10, 2018, episode and we have your Fear The Walking Dead Recap below! On tonight’s FTWD season 4 episode 8 called, “No One’s Gone,” as per the AMC synopsis,  “Madison fights to preserve the life she worked so hard to build. Morgan tries to do the right thing.”

It is night, Madison is out in the woods and pulls a gun on someone, tells them that she their vehicle and has an idea of what they are capable of. Madison tells the person to toss the keys. Madison trips over a wire shoots by accident, the person she was talking to is Al.

We move back to the stadium, the swat van is in the middle and there are thousands of walkers coming towards them. Naomi is concerned that John is not going to make it, tells Al she needs supplies so Al is going to try to move then van closer to where they think they can get supplies.

Back to Madison and Al’s encounter, they are in the swat van, Al’s hands . are tied, Madison wants the keys and Al won’t tell her where they are. Madison finds Al’s tapes, she tells her they are interviews of people that she met. Madison wants the keys, Al tells her she tried to do this the right way, she gets lose and tries to jump Madison but it doesn’t work. Madison ends up getting the keys, Al passes out and when she wakes, they are moving.

Back to the stadium, Al can’t go any closer, she is afraid that running over the walkers will get stuck in the wheel well. Al shoots a ton of walkers so Naomi and Morgan can make a run for it to get the supplies. All of a sudden a blast goes off, Alicia, Luciana, and Victor have found them.

Back to Madison and Al, Madison is watching the tapes, looking for someone she knows and is frustrated that she finds nothing. A walker comes to the van window, Madison is surprised that Al is outside the van and pulls a gun on her.

Back to the stadium, gun fire ensues and Alicia tells Al to give up and she says no way. Meanwhile, Morgan and Naomi are fighting their way through walkers to get to the infirmary to get supplies. John is not doing well, looks like he has passed out. Al tries to apply pressure to his wound. John is awake he wants Charlie to videotape him. He says if he doesn’t make it, its ok, as long as Naomi does and he wants her to stop running from people. Alicia has broken through the van, the door cam off and both she and Al are aiming at each other.

Madison and Al are talking, Al wants her story but Madison is hesitant to give it up. Al tells her that they are connected through this screwed up world. Al shares her story about a warlord who thought he owned the place where she was and nobody did anything about it because they were scared. In the end, the guy had nothing, the people stood up to him and the truth came out. She goes on to say that she doesn’t have the story she is looking for, she is sorry. Al then asks Madison about her kids, she says that she promised to keep them safe and as unable to keep their promise.

At the stadium, Alicia has a gun on Al and tells her to tell Naomi that everything is safe outside, they can come out, or she will kill Charlie. John sees the walkie talkie on the floor and hits the button, Morgan and Naomi can hear everything that is going on in the van. Victor radios Alicia to tell her Morgan and Naomi are not coming out and it is just enough distraction for Al to try and grab Alicia’s gun.

Madison tells Al that she promised her kids she would find them a place to live, not just walls, a place where her kids wouldn’t have to do what she did to her today. Madison said she thought she found that place.

Back in the stadium, Alicia and Al are fighting. Charlie grabs the radio and tells Morgan to hurry, Al needs his help. Al got control and Alicia sees some cups of soup noodles on the floor, she asks Al where she got them and she says she traded them for an interview. Alicia finds the tapes and there is one labeled AMINA, she asks Al if she knew her.

Madison tells Al about a bird that flew into one of their windows and clipped it’s wing, she and the kids tried to save it, they called the bird Amina. Madison says her daughter was determined that the bird was going to live, Amina made it, they nursed the bird back to health and never gave up on her when know one else would – and there is not a whole lot of that left anymore.

Alicia is watching the tape of her mom, all is quiet in the van. Al tells Alicia that Madison never told her what her daughter’s name was. Alicia goes to the infirmary, she pulls a gun on Morgan and tells him to step aside. Alicia points the gun at Naomi and tells her that her mom is dead because of what she did. Morgan tries to reason with Alicia not to shoot Naomi, he tells her things can change. Alicia puts the gun down and starts to cry, Moran tells Naomi to go to John.

Al lets Madison loose after they finish the video, she asks her where she is heading. Madison wants to find her children, Al gives her some food to tide her over, along with her gun. We see Madison alone in a truck, she finds Alicia, Victor and Luciana. Nick is standing in the doorway to the building, this is when she found them and before they inhabited the baseball stadium. Madison tells them she was helped by someone and she wants to do the same for other people.

Back in the swat van, Alicia, Victor and Luciana are inside, Naomi is tending to John. Al asks Alicia what happened to Madison, she tells her to pull over. Naomi has John all bandaged up and on an IV. Naomi tells John her real name is June, he tells her it is his favorite month. They pull over on the side of the road, get out and light a fire. Al is taping, Alicia tells her about what happened to her mom. They were surrounded, they found as hard as they could, Madison told everyone to stay inside, it was safe and the walls would hold.

Madison had more faith than everyone else. Before they got back to the gate, everyone tried to run, Madison tried to stop them. Victor says that all the people Madison brought in, they all dies. Naomi says that she tried to change their minds about leaving, but they wouldn’t listen.

Madison ran until she couldn’t run anymore. Alicia says they couldn’t get back to the stadium, so they wanted to clear a path. Madison had another idea, she lit a flare which caused the walkers to go after her and save them. Alicia says it was never about the stadium, it was about the people and that is why Madison gave up her life, so they could live. Victor hands out ramen noodles to everyone to eat, they share a meal by the fire with each other.