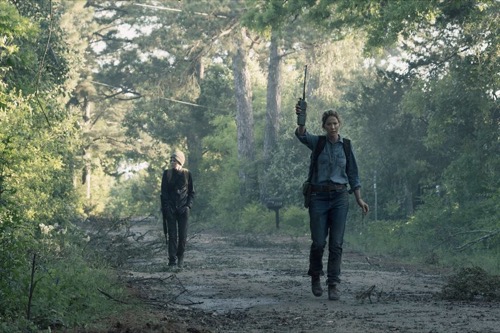 On AMC tonight Fear The Walking Dead (FTWD) airs with an all-new Sunday, September 2, 2018, episode and we have your Fear The Walking Dead Recap below! On tonight’s FTWD season 4 episode 12 called, “Weak,” as per the AMC synopsis,  “June helps when Al’s health deteriorates. Meanwhile, Morgan searches for friends lost in the storm.”

June is looking at a video of John. June talks into the walkie-talkie and says, “I should have never left you, John, I saw the tape you made when you first met Al, you believed. If Al asked me the same question, today, I don’t think I could have answered like you did. You knew me, John, at least I think you do. When the going gets tough I run, or worse. Things are pretty tough right now, how did you believe.” Al walks up and asks June if she is trying to reach John again. Al reminds her that they cannot recharge the battery so use it wisely.

June and Al are out of the water. All of a sudden they hear voices on the walkie-talkie and June thinks it is John.

Morgan is still with his new acquaintances, Jim, Wendell, and Sarah. He is the voice on the other end of the walkie talkie, but neither he nor June can hear each other clearly.

June sets out with Al for higher ground to get a better reception on the walkie-talkie but Al is not feeling well. June is worried about Al, she has a slight fever. The two come across a pickup truck with a walker inside, they kill it and take the truck. June apologizes to Al for using all the battery on her camera to watch a video of John.

Morgan is dropping another box when he hears June on the radio; he tells his friends that he is taking a walk to try and get a better signal.

June hears Morgan voice, Al opens the door to the truck and throws up. All of a sudden someone is driving Al’s van right past them. Al speeds up in a chase after them and hits something metal, the pickup truck blows a tire. Al tells June they need to get her truck back, there are antibiotics in it.

Morgan happens upon a woman who is going through one of the boxes, he tells her she can take what she needs, she says she doesn’t need anything because she is not weak. Morgan then tells her that he is going on his way. As he is leaving, she tells him that he is right, things are tough out there and he should be careful.

June is changing the tire, she tells Al to keep talking to her, stay with her, but Al looks extremely sick.