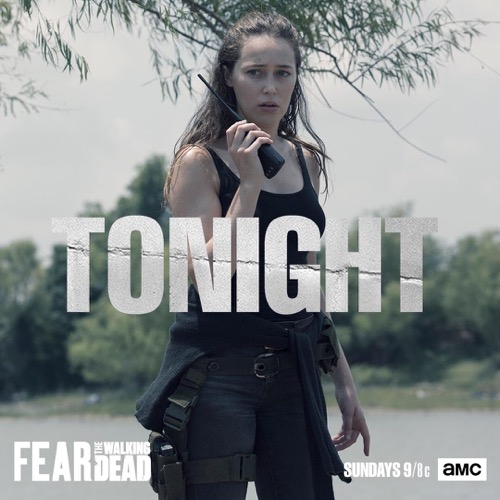 On AMC tonight Fear The Walking Dead (FTWD) airs with an all-new Sunday, September 23, 2018, episode and we have your Fear The Walking Dead Recap below! On tonight’s FTWD season 4 episode 15 called, “I Lose People…,” as per the AMC synopsis,  “The group’s hope falters as they seek a way out. Alicia and Charlie reunite with friends.”

June, Jimbo, Morgan and the others are still stuck on the rooftop while they try to communicate with Al by radio. Morgan doesn’t know how to get them out of this. June tries to change his dreary disposition.

John and Strand are stuck on a tiny island with gators in the water. John isn’t sure if they can be reached and helped. Strand tries to be the optimistic one. He thinks it is possible.

Martha looks over a map bleeding from a bite mark from a walker. Meanwhile, Jimbo looks like he is going to jump. Morgan comes to stop him. Jimbo tells him he isn’t going to jump but blames Morgan for his fate. Morgan asks him for help getting the others out. Jimbo laughs at him. Sarah tells Jimbo she wants his beer recipe since he doesn’t plan on going with them. He isn’t giving in until Sarah tells him it can move on. For a second he seems like he might change his mind until he tells her to leave him alone.

Alicia and Charlie duck after a shot is fired at them. It is Martha. She tries to come at them but drops to the ground.

Morgan and the gang ride the elevator down from the roof. Jimbo isn’t with them. They make their way through one of the hospital floors with few walkers who are tripped under fallen debris. They come across a few walkers that must have been taken out by Al. They make their way into a boiler room and find a message from Al on a clip board. She is headed to the freight elevator. Her walkie died. If they find her dead she wants her tapes to be held safe.

Alicia and Charlie come out of nowhere in the SWAT truck and blow their way through the water to John and Strand. Alicia and Strand are back to talking. They meet Charlie for the first time.

Morgan takes a look outside. They are surrounded. He wants them to take the elevator and he plans to distract the walkers while they get away. June and the others object but he tells them he has to do this. Morgan heads back to the roof with a dead walker as bait. He tells Jimbo they have work to do.

June and John finally get to talk by walkie. He tells her he had a blackjack for her but he ate it. He wants to know where she is now. They make plans to meet as June and the others come up to the fencing on the ground surrounding the hospital. It is filled with walkers.

John and Strand stare at Martha on the back of the SWAT truck as she comes to. She screeches when she realizes what is happening and how her hands are tied.

On the roof, Morgan asks Jimbo to help but he declines. Morgan takes the walker and hangs him off the roof, swinging him out and on top of the roof of a car below. The alarm sounds. The walkers all make their way to the noise. Morgan radios to June and the others telling them to run. June radios to him to see when he is coming down. He tells her the power is out. He needs to stay behind to make up for a few things.

Sometime later Jimbo asks Morgan to end him before he turns. They hear a car pull up. John and June both radio to him. They are getting him out. John thinks anything is possible. They all came back for him. Morgan looks over the ledge and sees that they have a fire truck with a ladder. The hydraulics are still working. They put up the ladder but they are shy by a couple of levels. Morgan grabs a rope and gets ready to go. He tells Jimbo he has to come too. Jimbo tells him to go. Morgan shimmies down the side of the building and comes face to face with a walker on the next story. They tussle. John kills him with a single shot from the ground. Morgan jumps into the bucket of the ladder. They all get on the fire truck and are surrounded. Wendell and Charlie are in the SWAT truck feet away.

Morgan tells them he will get them out. He said he would. Jimbo interrupts. He is going to choose how he goes, but first he tells Sarah his recipe. When he is done they hear silence for a few until a car alarm goes off. Jimbo has jumped off the roof. They gang gets in the truck and discovers Martha is gone. On their ride they talk about leaving the city. They decide to head to Alexandria. Meanwhile, Martha has made Jimbo her next walker.